Proposed model for the role of Nr0b2 in DES-induced testicular abnormalities. 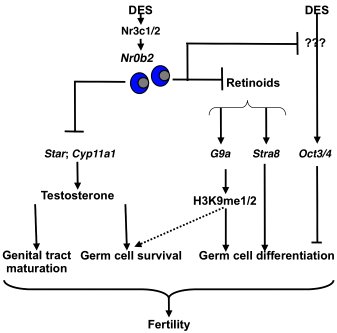 Our results indicate that Nr0b2 is a major actor in DES-induced testicular pathophysiology. Nr0b2 deficiency counteracts the negative effects of DES. In P10 mice, DES induces a blockage in meiosis entry and/or progression, which is characterized by the higher expression of genes of undifferentiated spermatogonia () and a decrease of meiotic genes (). The effect is stronger in DES-treated males compared with males with 1 EB treatment, which could be explained, at least in part, by the specific induction of expression by DES. EB and DES treatment alters H3K9me1 and H3K9me2, which are essential for meiosis progression (). The impact on histones is driven by the lower accumulation of mRNA after DES exposure. This effect on meiosis is explained, at least in part, by the lack of the repressive activity of Nr0b2 on Rar and retinoid signaling. Finally, in adults, Nr0b2 inhibits testicular steroidogenesis, on the one hand by inhibiting the expression of , which controls the expression of the steroidogenic genes, and on the other hand by repressing the transcriptional activity of Nr5a2 and/or Nr5a1. All these data explain how Nr0b2 plays a major role in the subfertility induced by DES exposure.