Transfusion-related acute lung injury (TRALI) is the leading cause of transfusion-associated mortality in the US. Previously, we established an immune-mediated TRALI mouse model, wherein mice with cognate antigen were challenged with MHC class I mAb. In this study, when mice housed in a rodent, specific pathogen–free barrier room were challenged with MHC I mAb, there was significant protection from TRALI compared with nonbarrier mice. Priming mice with LPS restored lung injury with mAb challenge. Using TLR4-deficient bone marrow chimeras, the priming phenotype was restricted to animals with WT hematopoietic cells, and depletion of either neutrophils or platelets was protective. Both neutrophils and platelets were sequestered in the lungs of mice with TRALI, and retention of platelets was neutrophil dependent. Interestingly, treatment with aspirin prevented lung injury and mortality, but blocking the P selectin or CD11b/CD18 pathways did not. These data suggest a 2-step mechanism of TRALI: priming of hematopoietic cells, followed by vascular deposition of activated neutrophils and platelets that then mediate the severe lung injury. Furthermore, our data offer an explanation for the increased incidence of TRALI in patients with immune priming conditions, and we suggest what we believe to be a novel therapeutic approach.

BALB/c mice (H2Kd) housed in a barrier, specific pathogen–free room are protected from TRALI and have lower circulating neutrophils compared with that in nonbarrier animals. 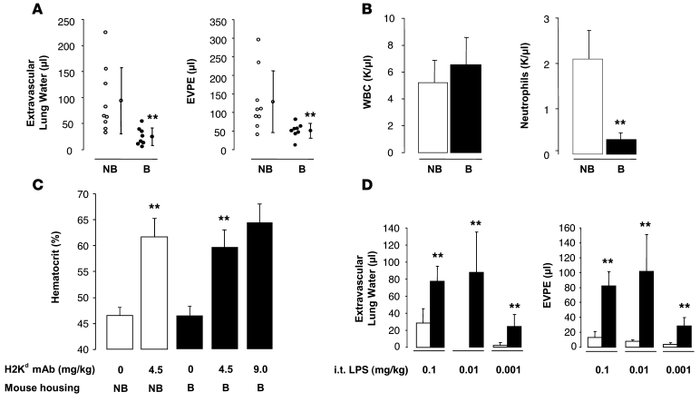