Metastatic disease is responsible for the majority of human cancer deaths. Understanding the molecular mechanisms of metastasis is a major step in designing effective cancer therapeutics. Here we show that the T-box transcription factor Brachyury induces in tumor cells epithelial-mesenchymal transition (EMT), an important step in the progression of primary tumors toward metastasis. Overexpression of Brachyury in human carcinoma cells induced changes characteristic of EMT, including upregulation of mesenchymal markers, downregulation of epithelial markers, and an increase in cell migration and invasion. Brachyury overexpression also repressed E-cadherin transcription, an effect partially mediated by Slug. Conversely, inhibition of Brachyury resulted in downregulation of mesenchymal markers and loss of cell migration and invasion and diminished the ability of human tumor cells to form lung metastases in a xenograft model. Furthermore, we found Brachyury to be overexpressed in various human tumor tissues and tumor cell lines compared with normal tissues. We also determined that the percentage of human lung tumor tissues positive for Brachyury expression increased with the stage of the tumor, indicating a potential association between Brachyury and tumor progression. The selective expression of Brachyury in tumor cells and its role in EMT and cancer progression suggest that Brachyury may be an attractive target for antitumor therapies. 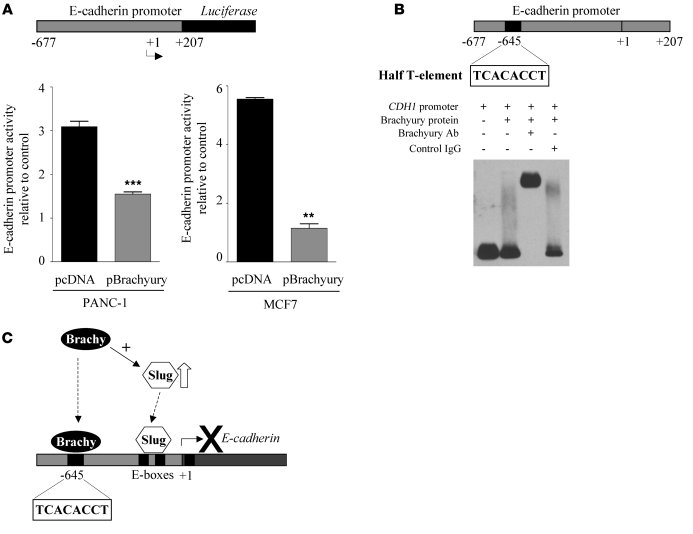 () Relative E-cadherin promoter activity compared with the control for each cell line. Results from 1 of 3 experiments are shown; ** < 0.05, *** < 0.001. Shown is a schematic representation of the reporter construct. () EMSA assay with recombinant His-Brachyury protein and a labeled fragment from the E-cadherin promoter. Supershift assay was performed with anti-Brachyury antibody versus control IgG. () Proposed model for E-cadherin control by Brachyury (Brachy).