Reemergence of antibiotic-resistant Staphylococcus aureus in the genomics era

Reemergence of antibiotic-resistant Staphylococcus aureus in the genomics era

Staphylococcus aureus is the leading cause of bacterial infections in developed countries and produces a wide spectrum of diseases, ranging from minor skin infections to fatal necrotizing pneumonia. Although S. aureus infections were historically treatable with common antibiotics, emergence of drug-resistant organisms is now a major concern. Methicillin-resistant S. aureus (MRSA) was endemic in hospitals by the late 1960s, but it appeared rapidly and unexpectedly in communities in the 1990s and is now prevalent worldwide. This Review focuses on progress made toward understanding the success of community-associated MRSA as a human pathogen, with an emphasis on genome-wide approaches and virulence determinants.

Emergence of antibiotic-resistant , epidemic waves, and estimated deaths caused by MRSA in the United States. 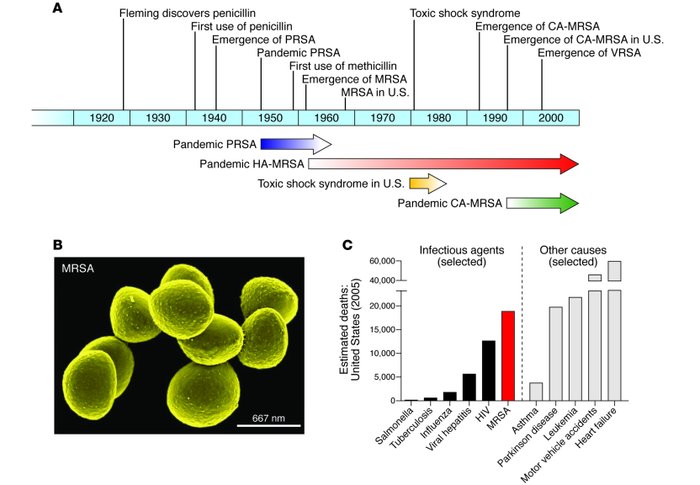 () Timeline indicates the year in which an event occurred or was reported. Arrows indicate approximate length of time for each pandemic/epidemic. () Scanning electron micrograph of strain COL, one of the first MRSA isolates from Colindale, United Kingdom. Original magnification, ×45,000. () Comparison of estimated deaths in the United States in 2005 due to individual infectious agents or other causes. Data are CDC estimates from National Vital Statistics Reports () and Klevens et al. (). Deaths associated with MRSA infection are based on the estimated number of in-hospital deaths rather than attributable mortality, whereas data for all other causes of mortality are based on US Standard Certificate of Death. Note also that mortality due to MSSA is not included, and thus estimated mortality associated with all infections is not shown.