Use of lithium, the mainstay for treatment of bipolar disorder, is limited by its frequent neurological side effects and its risk for overdose-induced toxicity. Recently, lithium has also been proposed as a treatment for Alzheimer disease and other neurodegenerative conditions, but clinical trials have been hampered by its prominent side effects in the elderly. The mechanisms underlying both the positive and negative effects of lithium are not fully known. Lithium inhibits glycogen synthase kinase–3 (GSK-3) in vivo, and we recently reported neuronal apoptosis and motor deficits in dominant-negative GSK-3–transgenic mice. We hypothesized that therapeutic levels of lithium could also induce neuronal loss through GSK-3 inhibition. Here we report induction of neuronal apoptosis in various brain regions and the presence of motor deficits in mice treated chronically with lithium. We found that GSK-3 inhibition increased translocation of nuclear factor of activated T cells c3/4 (NFATc3/4) transcription factors to the nucleus, leading to increased Fas ligand (FasL) levels and Fas activation. Lithium-induced apoptosis and motor deficits were absent when NFAT nuclear translocation was prevented by cyclosporin A administration and in Fas-deficient lpr mice. The results of these studies suggest a mechanism for lithium-induced neuronal and motor toxicity. These findings may enable the development of combined therapies that diminish the toxicities of lithium and possibly other GSK-3 inhibitors and extend their potential to the treatment of Alzheimer disease and other neurodegenerative conditions.

Fas-deficient () mice are resistant to chronic lithium-induced neuronal apoptosis and do not show the motor coordination deficits observed in wild-type mice. 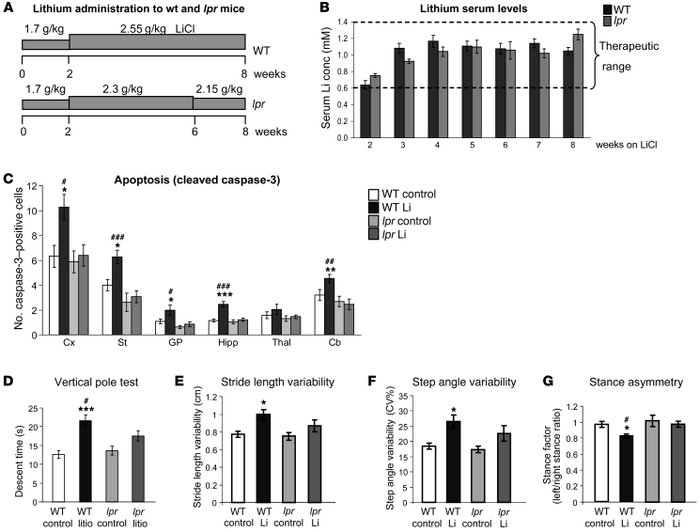