Although therapeutically targeting a single signaling pathway that drives tumor development and/or progression has been effective for a number of cancers, in many cases this approach has not been successful. Targeting networks of signaling pathways, instead of isolated pathways, may overcome this problem, which is probably due to the extreme heterogeneity of human tumors. However, the possibility that such networks may be spatially arranged in specialized subcellular compartments is not often considered in pathway-oriented drug discovery and may influence the design of new agents. Hsp90 is a chaperone protein that controls the folding of proteins in multiple signaling networks that drive tumor development and progression. Here, we report the synthesis and properties of Gamitrinibs, a class of small molecules designed to selectively target Hsp90 in human tumor mitochondria. Gamitrinibs were shown to accumulate in the mitochondria of human tumor cell lines and to inhibit Hsp90 activity by acting as ATPase antagonists. Unlike Hsp90 antagonists not targeted to mitochondria, Gamitrinibs exhibited a “mitochondriotoxic” mechanism of action, causing rapid tumor cell death and inhibiting the growth of xenografted human tumor cell lines in mice. Importantly, Gamitrinibs were not toxic to normal cells or tissues and did not affect Hsp90 homeostasis in cellular compartments other than mitochondria. Therefore, combinatorial drug design, whereby inhibitors of signaling networks are targeted to specific subcellular compartments, may generate effective anticancer drugs with novel mechanisms of action. 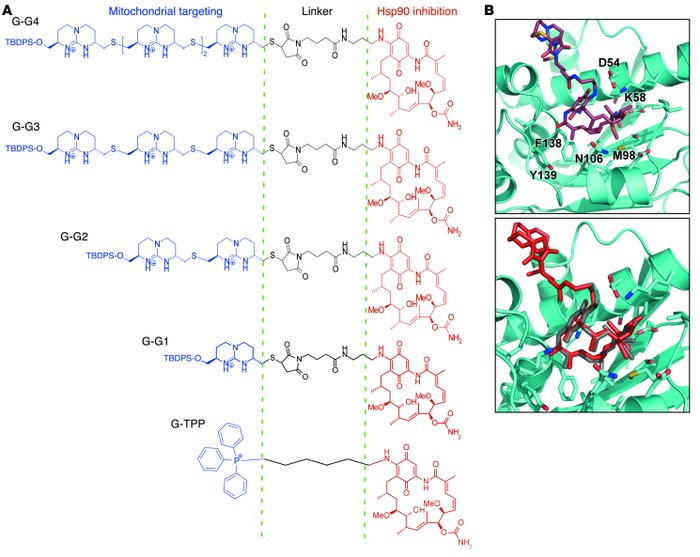 () Combinatorial modular design. The indicated individual modules of Gamitrinibs (mitochondrial targeting, linker, and Hsp90 inhibition) are indicated. G-G1, Gamitrinib-G1; G-TPP, Gamitrinib–TPP-OH; TBDPS, tert-butyldiphenylsilyl. () A 3D docking model of Gamitrinib-G1 with Hsp90 N-domain (top panel). The side chains of contact sites are labeled and in color. An overlay of Gamitrinib-G1 (red) and GA (gray) in the ATPase pocket of Hsp90 (bottom panel).