Genetic instability, which leads to an accumulation of various genetic abnormalities, has been considered an essential component of the human neoplasic transformation process. However, the molecular basis of genomic instability during tumorigenesis remains incompletely understood. Growing evidence indicates that checkpoint with forkhead and ring finger domains (CHFR), a recently identified mitotic checkpoint protein, plays an important role in maintaining chromosome integrity and functions as a tumor suppressor. In this study, we used high-throughput technology to conduct gene expression profiling of human colon cancers and found that loss of CHFR expression frequently occurred in colon cancers with high microsatellite instability (MSI-H). Downregulation of CHFR expression was closely associated with overexpression of Aurora A, an important mitotic kinase. Mice with deficiencies in both Chfr and Mlh1 (the gene that encodes the DNA mismatch-repair protein Mlh1) displayed dramatically higher incidence of spontaneous tumors relative to mice deficient for only one of these genes. These results suggest that defects in both Chfr and Mlh1 synergistically increase predisposition to tumorigenesis. 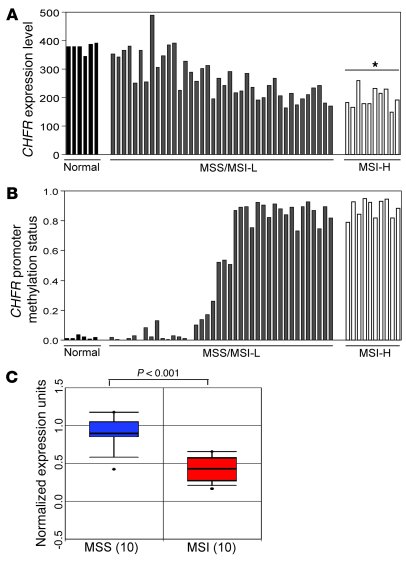 () mRNA levels in 6 cases of normal colon mucosa, 40 cases of MSS/MSI-L colon cancer, and 10 cases of MSI-H colon cancer. * 0.001, compared with normal colon samples and determined by Student’s test. () Methylation status of promoter in those colon samples. Data are presented as the ratio of fluorescent signal from the methylated allele to the sum from the fluorescent signal from both methylated and unmethylated alleles. These values range from 0 (unmethylated) to 1 (methylated). () transcript levels in colon cancer measured using DNA microarray as reported by Koinuma et al. (). There were 10 cases of MSS tumors and 10 cases of MSI tumors included in the study. axis represents normalized expression units. Box-and-whiskers plots indicate median values of the data and 25th and 75th percentiles of the data sets. Whiskers indicate minimum and maximum data values that are not outliers. Points outside of the ends are outliers. value was calculated by using the Student’s test.