Congenital anomalies affecting the ureter-bladder junction are frequent in newborns and are often associated with other developmental defects. However, the molecular and morphological processes underlying these malformations are still poorly defined. In this study, we identified the leukocyte antigen–related (LAR) family protein tyrosine phosphatase, receptor type, S and F (Ptprs and Ptprf [also known as Lar], respectively), as crucially important for distal ureter maturation and craniofacial morphogenesis in the mouse. Embryos lacking both Ptprs and Ptprf displayed severe urogenital malformations, characterized by hydroureter and ureterocele, and craniofacial defects such as cleft palate, micrognathia, and exencephaly. The detailed analysis of distal ureter maturation, the process by which the ureter is displaced toward its final position in the bladder wall, leads us to propose a revised model of ureter maturation in normal embryos. This process was deficient in embryos lacking Ptprs and Ptprf as a result of a marked reduction in intrinsic programmed cell death, thereby causing urogenital system malformations. In cell culture, Ptprs bound and negatively regulated the phosphorylation and signaling of the Ret receptor tyrosine kinase, whereas Ptprs-induced apoptosis was inhibited by Ret expression. Together, these results suggest that ureter positioning is controlled by the opposing actions of Ret and LAR family phosphatases regulating apoptosis-mediated tissue morphogenesis. 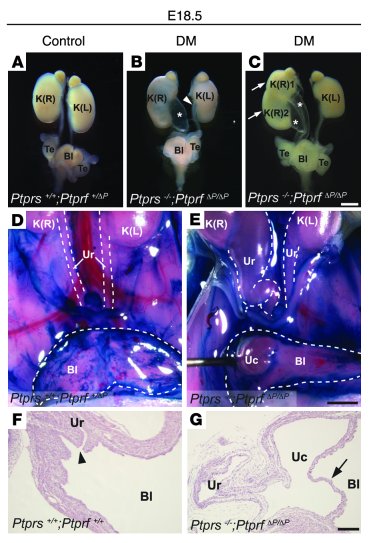