The retinoic acid–inducible gene I (RIG-I) and melanoma differentiation–associated antigen 5 (MDA-5) helicases sense viral RNA in infected cells and initiate antiviral responses such as the production of type I IFNs. Here we have shown that RIG-I and MDA-5 also initiate a proapoptotic signaling pathway that is independent of type I IFNs. In human melanoma cells, this signaling pathway required the mitochondrial adapter Cardif (also known as IPS-1) and induced the proapoptotic BH3-only proteins Puma and Noxa. RIG-I– and MDA-5–initiated apoptosis required Noxa but was independent of the tumor suppressor p53. Triggering this pathway led to efficient activation of mitochondrial apoptosis, requiring caspase-9 and Apaf-1. Surprisingly, this proapoptotic signaling pathway was also active in nonmalignant cells, but these cells were much less sensitive to apoptosis than melanoma cells. Endogenous Bcl-xL rescued nonmalignant, but not melanoma, cells from RIG-I– and MDA-5–mediated apoptosis. In addition, we confirmed the results of the in vitro studies, demonstrating that RIG-I and MDA-5 ligands both reduced human tumor lung metastasis in immunodeficient NOD/SCID mice. These results identify an IFN-independent antiviral signaling pathway initiated by RIG-I and MDA-5 that activates proapoptotic signaling and, unless blocked by Bcl-xL, results in apoptosis. Due to their immunostimulatory and proapoptotic activity, RIG-I and MDA-5 ligands have therapeutic potential due to their ability to overcome the characteristic resistance of melanoma cells to apoptosis.

RIG-I and MDA-5 induce expression of the proapoptotic BH3-only members of the Bcl-2 family Noxa, Puma, Bim, and Bik. 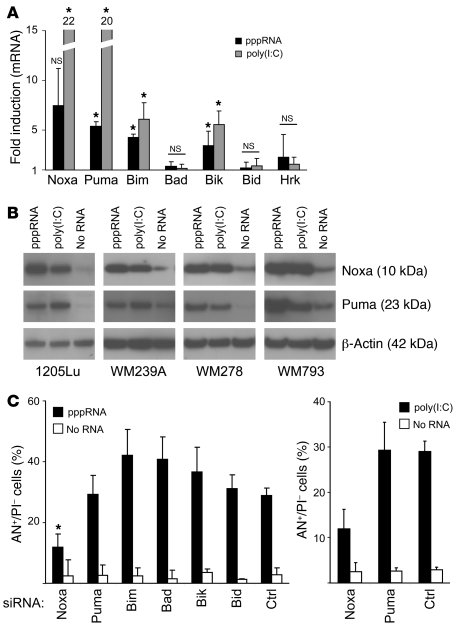