Bullous pemphigoid (BP) is an autoimmune skin disease characterized by subepidermal blisters and autoantibodies against 2 hemidesmosome-associated proteins, BP180 and BP230. The immunopathologic features of BP can be reproduced in mice by passive transfer of anti-BP180 antibodies. Lesion formation in this animal model depends upon complement activation and neutrophil recruitment. In the present study, we investigated the role of neutrophil elastase (NE) in antibody-induced blister formation in experimental BP. Abnormally high levels of caseinolytic activity, consistent with NE, were detected in extracts of lesional skin and blister fluid of mice injected with anti-BP180 IgG. The pathogenic anti-BP180 IgG failed to induce subepidermal blistering in NE-null (NE–/–) mutant mice. NE–/– mice reconstituted with neutrophils from wild-type mice became susceptible to experimental BP. Wild-type mice given NE inhibitors (α1-proteinase inhibitor and Me-O-Suc-Ala-Ala-Pro-Val-CH2Cl), but not mice given cathepsin G/chymase inhibitors (α1-antichymotrypsin or Z-Gly-Leu-Phe-CH2Cl), were resistant to the pathogenic activity of anti-BP180 antibodies. Incubation of murine skin with NE induced BP-like epidermal-dermal detachment. Finally, NE cleaved BP180 in vitro and in vivo. These results implicate NE directly in the dermal-epidermal cleavage induced by anti-BP180 antibodies in the experimental BP model. 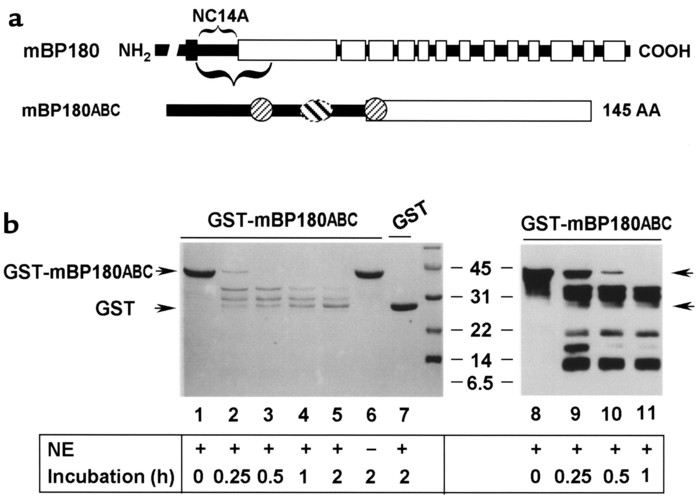 In vitro degradation of mBP180ABC by neutrophil elastase. () The schematic diagram is a structural representation of mBP180. The vertical black bar designates the transmembrane domain. The COOH-terminal extracellular region is made up of 13 collagen triple-helical (open bar) and 14 noncollagenous (filled bar) domains. The purified recombinant GST-mBP180ABC fusion protein is 42 kDa, containing 26 kDa GST and a 145-amino acid fragment of the mBP180 extracellular domain. The mBP180ABC is made up of an 8-kDa noncollagenous NC14A (filled bar) and an 8-kDa collagenous region (open bar). One pathogenic (oval) and 2 nonpathogenic epitopes (circles) are located within the mBP180ABC (see ref. ). () The GST-mBP180ABC fusion protein (lanes 1–6, 8–11) or GST alone (lane 7) was incubated with (lanes 1–5, 7–11) or without (lane 6) NE at 37°C for 0 minutes (lanes 1 and 8), 0.25 hours (lanes 2 and 9), 0.5 hours (lanes 3 and 10), 1 hour (lanes 4 and 11), or 2 hours (lanes 5–7). The products were then resolved by SDS-PAGE and detected by Coomassie blue staining (lanes 1–7) or immunoblot (lanes 8–11). Fragments of 34 kDa, 29 kDa, and 26 kDa were generated from the cleavage of the fusion protein by elastase (lanes 2–5 and 9–11). No degradation products were seen after incubation without NE (lane 6). GST was not degraded by NE (lane 7). Immunoblot using anti-mBP180ABC IgG identified 3 additional fragments with molecular weights of approximately 18 kDa, 15 kDa, and 9 kDa (lanes 9–11). The immunoreactivity of these bands with anti-mBP180ABC was abolished by preadsorption of the antibody with a 5-fold molar excess of GST-mBP180ABC fusion protein, but not with GST alone (data not shown).