Mammalian target of rapamycin (mTOR) is a component of a signaling pathway (PTEN/PI3K/AKT) that is frequently dysregulated in cancer. However, its precise relationship to the MAPK cascade (Ras/Raf/MEK/ERK), another pathway often implicated in tumorigenesis, has not been well defined. Recent evidence from tissue specimens obtained from patients who have received mTOR inhibitors suggests that ERK may be activated in response to mTOR interruption. In this issue of the JCI, Waugh Kinkade et al. and Carracedo et al. examine the relationship between these pathways in prostate and breast cancer cell model systems (see the related articles beginning on pages 3051 and 3065, respectively). Their findings suggest a link between inhibition of mTOR and ERK activation, possibly reflecting interruption of a novel negative S6K1-dependent feedback loop. Significantly, both groups observed that simultaneous inhibition of MEK/ERK and mTOR resulted in substantially enhanced antitumor effects both in vitro and in vivo. Together, these findings suggest that concurrent interruption of complementary signaling pathways warrants further investigation in cancer therapy.

Diagrammatic representation of the MAPK and the PTEN/PI3K/AKT/mTOR pathways and their potential interactions in transformed cells. 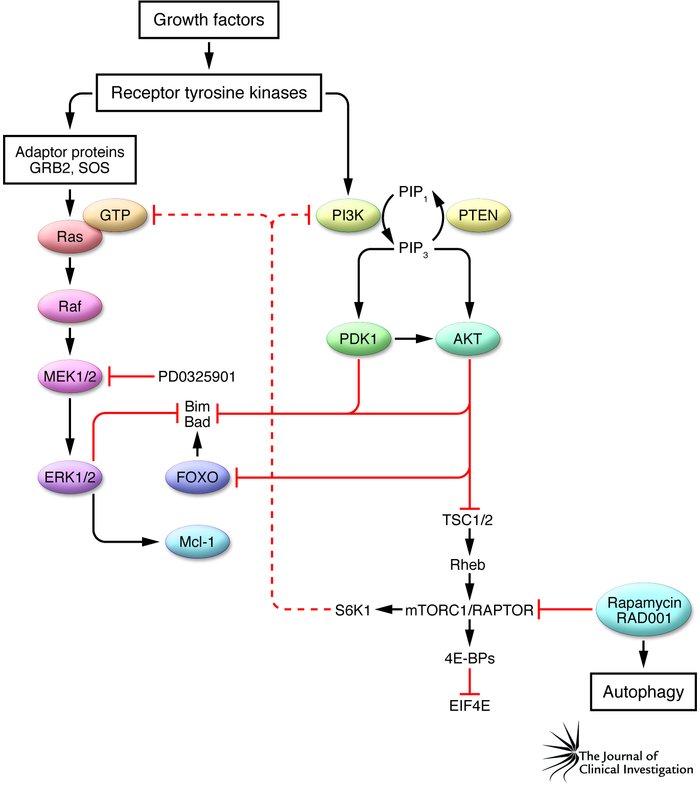 Growth factor and other survival signals are transduced through receptor tyrosine kinases via adaptor proteins (such as GRB2 and the guanine-nucleotide exchange factor SOS) and activate Ras and its downstream targets, Raf and MEK1/2, which results in the activation of ERK1/2. ERK1/2 activation leads to perturbations in downstream targets that promote survival, i.e., downregulation of Bim and Bad and upregulation of myeloid cell leukemia sequence 1 (Mcl-1). Growth factor survival signaling proceeds through the PI3K pathway, a process that is amplified in cells deficient in the PTEN phosphatase. PI3K activates pyruvate dehydrogenase kinase isozyme 1 (PDK1) and AKT, which either directly or indirectly (i.e, via forkhead box O [FOXO]) inactivate proapoptotic molecules such as Bim and Bad. AKT also activates mTORC1/regulatory-associated protein of mTOR (RAPTOR) by relieving it of the inhibitory influence of the tuberous sclerosis 1/2 (TSC1/2) complex. It is postulated that pharmacologic inhibition of mTOR (e.g., by rapamycin or RAD001) leads, via an S6K1- and PI3K-dependent process, to activation of Ras and MEK/ERK, which promotes cell survival in the face of mTOR inhibition. Inhibition of mTOR may also provoke an autophagic response. Conversely, interruption of the MAPK pathway (i.e., by MEK1/2 inhibitors such as PD0325901) in the setting of mTOR inhibition promotes cell death through a Bim-dependent mechanism. 4EBP, EIF4E-binding protein; EIF4E, eukaryotic translation initiation factor 4E; GRB2, growth factor receptor–bound protein 2; PIP1, phosphatidylinositol 3-phosphate; PIP3, phosphatidylinositol-3,4,5-triphosphate.