Mucosal diseases are often characterized by an inflammatory infiltrate that includes polymorphonuclear leukocytes (PMNs), monocytes, lymphocytes, and platelets. A number of studies have suggested that the interaction of platelets with leukocytes has an essential proinflammatory role. Here, we examined whether platelets migrate across mucosal epithelium, as PMNs are known to do, and whether platelets influence epithelial cell function. Initial studies revealed that human platelets did not efficiently transmigrate across human epithelial cell monolayers. However, in the presence of human PMNs, platelet movement across the epithelium was proportional to the extent of PMN transmigration, and strategies that blocked PMN transmigration diminished platelet movement. Furthermore, platelet-PMN comigration was observed in intestinal tissue derived from human patients with inflammatory bowel disease (IBD). The translocated platelets were found to release large quantities of ATP, which was metabolized to adenosine via a 2-step enzymatic reaction mediated by ecto-nucleotidases, including CD73 and ecto–nucleoside triphosphate diphosphohydrolases (ecto-NTPDases), expressed on the apical membrane of the intestinal epithelial cells. In vitro studies and a mouse model of intestinal inflammation were employed to define a mechanism involving adenosine-mediated induction of electrogenic chloride secretion, with concomitant water movement into the intestinal lumen. These studies demonstrate that ecto-NTPDases are expressed on the apical membrane of epithelial cells and are involved in what we believe to be a previously unappreciated function for platelets in the inflamed intestine, which might promote bacterial clearance under inflammatory conditions. 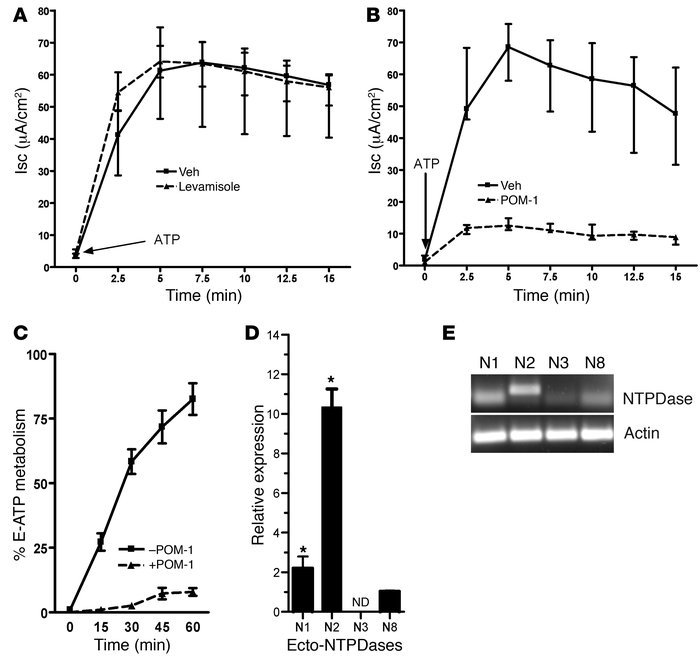 () Characterization of relative contributions of epithelial apical alkaline phosphatase to the Isc response elicited by ATP. T84 monolayers were preincubated with 10 μM levamisole for 5 minutes. () Inhibition of ecto-NTPDases by POM-1 (Na6[H2W12O40]) (10 μM) abolishes the effects of ATP-elicited changes on Isc. () Functional decrease of NTPDase surface activity by POM-1. T84 monolayers were washed, and NTPDase activity was determined by HPLC analysis of E-ATP conversion to E-AMP in the presence and absence of POM-1. ( and ) Expression of ecto-NTPDases on IECs. Total RNA was isolated from confluent T84 monolayers using real-time () and conventional PCR (). As shown, β-actin transcript was determined in parallel and used as a control. * < 0.01 compared with NTPDase-8 (N8). Data are derived from 3 monolayers in each condition and expressed as mean ± SEM. ND, not detected.