Osteoporosis results from an imbalance in skeletal remodeling that favors bone resorption over bone formation. Bone matrix is degraded by osteoclasts, which differentiate from myeloid precursors in response to the cytokine RANKL. To gain insight into the transcriptional regulation of bone resorption during growth and disease, we generated a conditional knockout of the transcription factor nuclear factor of activated T cells c1 (Nfatc1). Deletion of Nfatc1 in young mice resulted in osteopetrosis and inhibition of osteoclastogenesis in vivo and in vitro. Transcriptional profiling revealed NFATc1 as a master regulator of the osteoclast transcriptome, promoting the expression of numerous genes needed for bone resorption. In addition, NFATc1 directly repressed osteoclast progenitor expression of osteoprotegerin, a decoy receptor for RANKL previously thought to be an osteoblast-derived inhibitor of bone resorption. “Cherubism mice”, which carry a gain-of-function mutation in SH3-domain binding protein 2 (Sh3bp2), develop osteoporosis and widespread inflammation dependent on the proinflammatory cytokine, TNF-α. Interestingly, deletion of Nfatc1 protected cherubism mice from systemic bone loss but did not inhibit inflammation. Taken together, our study demonstrates that NFATc1 is required for remodeling of the growing and adult skeleton and suggests that NFATc1 may be an effective therapeutic target for osteoporosis associated with inflammatory states.

RANKL induces expression in the absence of NFATc1. 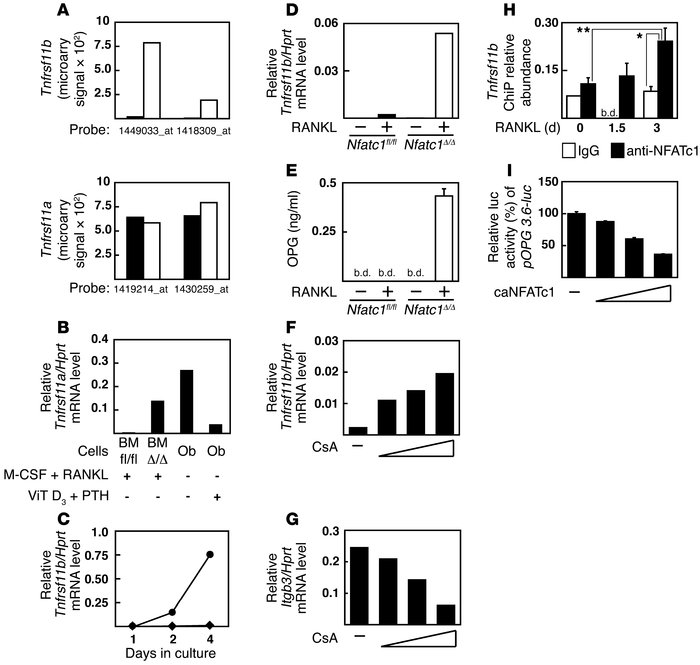