Successful transplantation requires the prevention of allograft rejection and, in the case of transplantation to treat autoimmune disease, the suppression of autoimmune responses. The standard immunosuppressive treatment regimen given to patients with autoimmune type 1 diabetes who have received an islet transplant results in the loss of T cells. In many other situations, the immune system responds to T cell loss through cytokine-dependant homeostatic proliferation of any remaining T cells. Here we show that T cell loss after islet transplantation in patients with autoimmune type 1 diabetes was associated with both increased serum concentrations of IL-7 and IL-15 and in vivo proliferation of memory CD45RO+ T cells, highly enriched in autoreactive glutamic acid decarboxylase 65–specific T cell clones. Immunosuppression with FK506 and rapamycin after transplantation resulted in a chronic homeostatic expansion of T cells, which acquired effector function after immunosuppression was removed. In contrast, the cytostatic drug mycophenolate mofetil efficiently blocked homeostatic T cell expansion. We propose that the increased production of cytokines that induce homeostatic expansion could contribute to recurrent autoimmunity in transplanted patients with autoimmune disease and that therapy that prevents the expansion of autoreactive T cells will improve the outcome of islet transplantation. 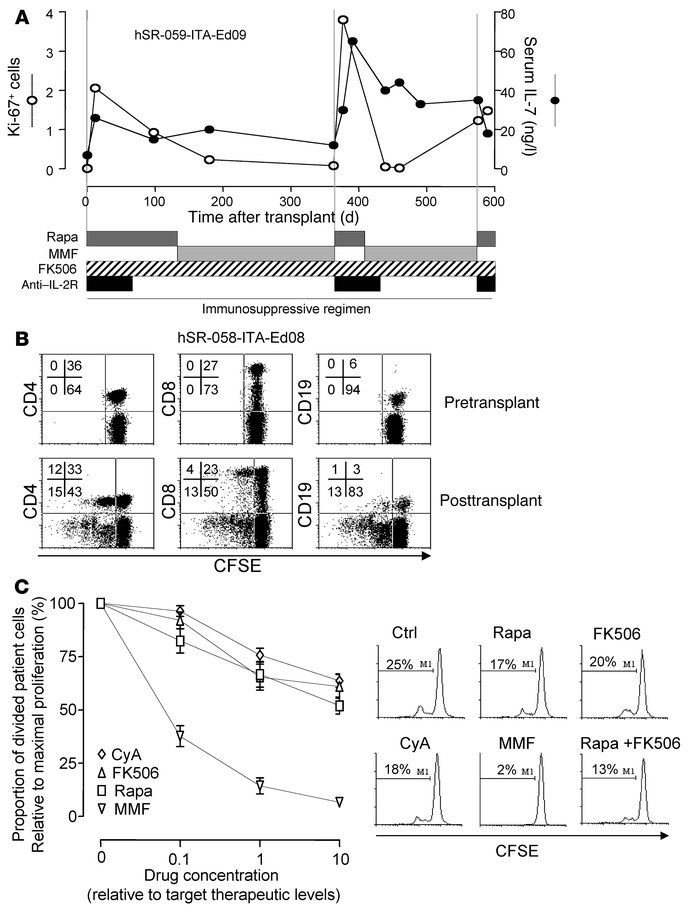 () Sequential values of lymphocyte Ki-67 positivity and serum IL-7 concentrations relative to time after transplant in patient hSR-059-ITA-Ed09, whose treatment alternated between rapamycin and MMF because of rapamycin intolerance. Transfer to MMF did not affect the increased serum IL-7 concentrations, but returned the levels of proliferating Ki-67+ cells to pretransplant values. () In vitro proliferation of washed CFSE-labeled PBMCs before and after transplant. FACS scans of proliferation (CFSE dilution) are shown for cells stained for CD4, CD8, and CD19. Numbers denote percentage of cells in the respective quadrants. Upper left and right quadrants show cells remaining in the culture that had or had not proliferated, respectively. Data are from 1 representative case of 10 patients studied (3 pretreated with rapamycin before islet transplantation; 4 islet-transplanted per Edmonton protocol; 3 pancreas and kidney transplant). () In vitro culture of post-transplant washed CFSE-labeled PBMCs from patient hSR-058-ITA-Ed08 in the presence of immunosuppressive drugs demonstrated the ability of increasing doses of rapamycin, MMF, FK506, and CyA to inhibit proliferation of post-transplant PBMCs. Doses are expressed as fold of therapeutic target concentrations. Also shown are FACS histograms of CFSE dilution in the absence (Ctrl) or presence of therapeutic concentrations of rapamycin, FK506, CyA, MMF, or rapamycin and FK506 combined. The percentage of cells that had proliferated at the end of culture is indicated.