The second messengers cAMP and cGMP can be degraded by specific members of the phosphodiesterase superfamily or by active efflux transporters, namely the multidrug resistance-associated proteins (MRPs) MRP4 and MRP5. To determine the role of MRP4 and MRP5 in cell signaling, we studied arterial SMCs, in which the effects of cyclic nucleotide levels on SMC proliferation have been well established. We found that MRP4, but not MRP5, was upregulated during proliferation of isolated human coronary artery SMCs and following injury of rat carotid arteries in vivo. MRP4 inhibition significantly increased intracellular cAMP and cGMP levels and was sufficient to block proliferation and to prevent neointimal growth in injured rat carotid arteries. The antiproliferative effect of MRP4 inhibition was related to PKA/CREB pathway activation. Here we provide what we believe to be the first evidence that MRP4 acts as an independent endogenous regulator of intracellular cyclic nucleotide levels and as a mediator of cAMP-dependent signal transduction to the nucleus. We also identify MRP4 inhibition as a potentially new way of preventing abnormal VSMC proliferation.

Expression of MRP4 and MRP5 in hCASMCs. 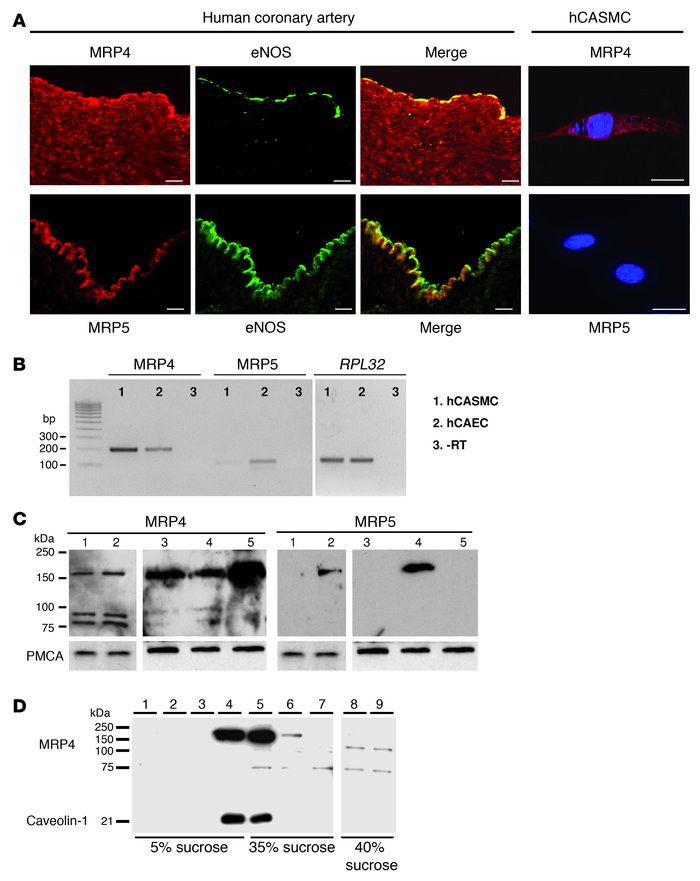 () Immuno­fluores­cence analysis of MRP4 and MRP5 expression (red) on a human coronary artery. eNOS (green) is used as a marker of the endothelium. MRP4 cDNA–transfected hCASMCs were labeled using a polyclonal affinity–purified antibody against MRP4. MRP5 was not detected in hCASMCs. Cells were labeled with DAPI (blue). Scale bars: 20 μm. () Representative RT-PCR showing detection of MRP4, MRP5, and mRNA in cultured hCASMCs and hCAECs. () Western blot analysis of MRP4 and MRP5 in total (lane 1) and membrane (lane 2) lysates from hCASMCs and in membranes from wild-type HEK cells (lane 3) and HEK cells stably expressing MRP5 (lane 4) or MRP4 (lane 5). The plasma membrane Ca2+ ATPase, PMCA, was used as a loading control. () Western blot analysis of MRP4 and caveolin-1 expression in hCASMC membranes purified on a discontinuous sucrose gradient, showing that MRP4 is present in caveolin-1–enriched fractions. Lanes are numbered according to the position of fractions from the top to the bottom of the gradient. Lanes 8 and 9 were run on the same gel but were noncontiguous.