Hepatic CB1 receptor is required for development of diet-induced steatosis, dyslipidemia, and insulin and leptin resistance in mice

Hepatic CB1 receptor is required for development of diet-induced steatosis, dyslipidemia, and insulin and leptin resistance in mice

Diet-induced obesity is associated with fatty liver, insulin resistance, leptin resistance, and changes in plasma lipid profile. Endocannabinoids have been implicated in the development of these associated phenotypes, because mice deficient for the cannabinoid receptor CB1 (CB1–/–) do not display these changes in association with diet-induced obesity. The target tissues that mediate these effects, however, remain unknown. We therefore investigated the relative role of hepatic versus extrahepatic CB1 receptors in the metabolic consequences of a high-fat diet, using liver-specific CB1 knockout (LCB1–/–) mice. LCB1–/– mice fed a high-fat diet developed a similar degree of obesity as that of wild-type mice, but, similar to CB1–/– mice, had less steatosis, hyperglycemia, dyslipidemia, and insulin and leptin resistance than did wild-type mice fed a high-fat diet. CB1 agonist–induced increase in de novo hepatic lipogenesis and decrease in the activity of carnitine palmitoyltransferase–1 and total energy expenditure were absent in both CB1–/– and LCB1–/– mice. We conclude that endocannabinoid activation of hepatic CB1 receptors contributes to the diet-induced steatosis and associated hormonal and metabolic changes, but not to the increase in adiposity, observed with high-fat diet feeding. Theses studies suggest that peripheral CB1 receptors could be selectively targeted for the treatment of fatty liver, impaired glucose homeostasis, and dyslipidemia in order to minimize the neuropsychiatric side effects of nonselective CB1 blockade during treatment of obesity-associated conditions.

The effect of rimonabant on RQ in regular chow–fed mice, as monitored by indirect calorimetry. 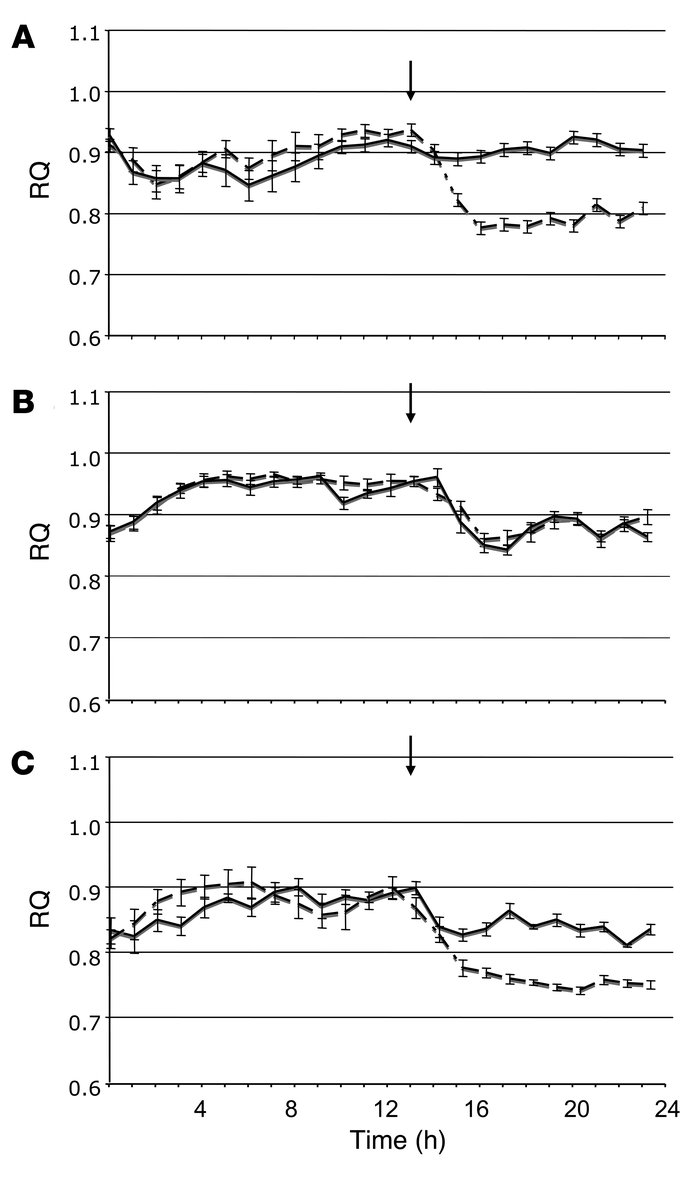