Neuroprotection can be achieved by preventing apoptotic death of postmitotic cells. Apoptotic death can occur by either a caspase-dependent mechanism, involving cytochrome c, apoptosis protease-activating factor–1 (Apaf-1), and caspase-9, or a caspase-independent mechanism, involving apoptosis-inducing factor (AIF). HIV protease inhibitors (PIs) avert apoptosis in part by preventing mitochondrial outer membrane permeabilization (MOMP), but the precise mechanism by which they work is not known. Here, we evaluated the impact of the PIs in a mouse model of retinal detachment (RD) in vivo and in murine primary retinal cell cultures in vitro. Oral administration of the PIs nelfinavir and ritonavir significantly inhibited photoreceptor apoptosis, while preventing the translocation of AIF from mitochondria to the nucleus as well as the activation of caspase-9. RD-induced photoreceptor apoptosis was similarly inhibited in mice carrying hypomorphic mutations of the genes encoding AIF or Apaf-1. Nelfinavir attenuated apoptosis as well as mitochondrial release of AIF and cytochrome c, and subsequent activation of caspase-9 in vitro, in photoreceptor cultures exposed to starvation or monocyte chemoattractant protein–1–stimulated (MCP-1–stimulated) macrophages. Our results suggest that the MOMP inhibition by PIs involved interruption of both caspase-dependent and caspase-independent apoptosis pathways and that PIs may be clinically useful for the treatment of diseases caused by excessive apoptosis.

Immunofluorescence detection of AIF and cleaved caspase-9 in the human retina after RD. 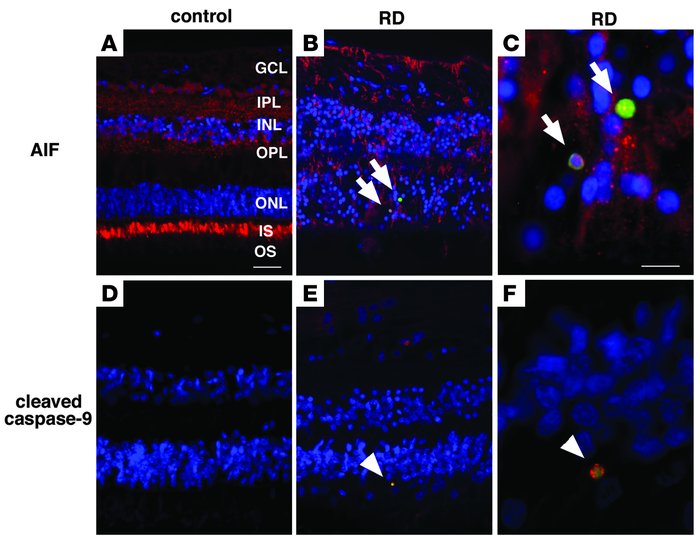 Paraffin-embedded retinal sections from the MEEI archives were analyzed retrospectively. Whereas histopathologic sections showed relatively preserved retinal structures in control retinas without RD ( and ), photoreceptor loss and secondary gliosis were observed in retinas with RD (, , , and ). Specific AIF-staining was noted in ganglion cells (GCL), inner plexiform layer (IPL), inner nuclear layer (INL), outer plexiform layer (OPL), and photoreceptor inner segment (IS) and outer segment (OS) of control retina (; AIF in red, TUNEL in green, DAPI in blue). Notably, in the detached retinas, AIF staining was mainly observed in proliferating glial cells as well as in TUNEL-positive photoreceptor nuclei ( and , arrows). Although no staining was observed in control retinas without RD (), cleaved caspase-9–positive cells were noted in the cytoplasm of TUNEL-positive cells in the detached retinas (cleaved caspase-9 in red, TUNEL in green, DAPI in blue; arrowheads in and ). Scale bars: 50 μm (, , , and ) and 10 μm ( and ).