Since the first diabetic was treated with insulin in 1922, millions of patients have relied on frequent insulin injections and glucose monitoring to combat the disease and its complications. Improved immunosuppressive regimens in islet transplantation developed in the Edmonton protocol raised the hopes of diabetics worldwide for a complete cure and insulin independence. However, transplant success has proven to be short-lived and accompanied by significant side effects. Using a clever genetic model for conditional ablation of pancreatic β cells in vivo, Nir and colleagues show in this issue of the JCI that the immunosuppressant drugs clinically inhibit β cell proliferation in the diabetic setting (see the related article beginning on page 2553). They also demonstrate that β cells have a remarkable regenerative capacity and that normal β cell mass can recover even in the setting of hyperglycemia. Their new mouse model should aid in the development of improved immunoregulatory strategies and in the elucidation of the molecular pathways that govern β cell regeneration. 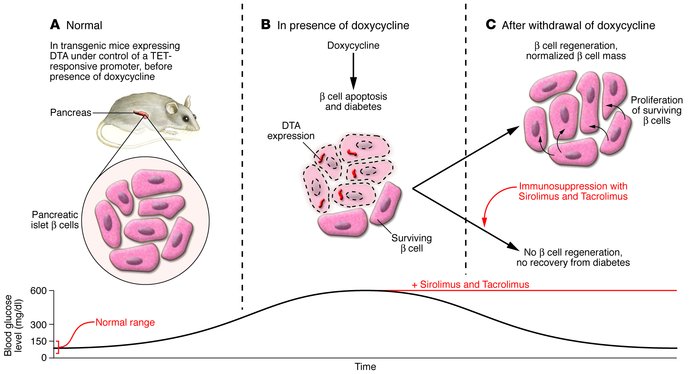 () Normal β cell mass and glucose homeostasis in transgenic mice before application of doxycycline, the inducer of β cell death, in the transgenic animal model used by Nir et al. in this issue of the (). DTA, diphtheria toxin A. () Doxycycline treatment activates the expression of diphtheria toxin A specifically in the β cells of the pancreas, reducing β cell mass by 80% and causing hyperglycemia. () Regeneration of β cell mass through β cell proliferation and normalization of glucose homeostasis after doxycycline withdrawal. In the presence of Sirolimus and Tacrolimus, the immunosuppressants used in human islet transplantation, the regenerative response of the β cells is inhibited, and hyperglycemia persists.