Identification of the signaling pathways that mediate neuronal survival signaling could lead to new therapeutic targets for neurologic disorders and stroke. Sublethal doses of NMDA can induce robust endogenous protective mechanisms in neurons. Through differential analysis of primary library expression and microarray analyses, here we have shown that nuclear factor I, subtype A (NFI-A), a member of the NFI/CAAT-box transcription factor family, is induced in mouse neurons by NMDA receptor activation in a NOS- and ERK-dependent manner. Knockdown of NFI-A induction using siRNA substantially reduced the neuroprotective effects of sublethal doses of NMDA. Further analysis indicated that NFI-A transcriptional activity was required for the neuroprotective effects of NMDA receptor activation. Additional evidence of the neuroprotective effects of NFI-A was provided by the observations that Nfia–/– neurons were highly sensitive to NMDA-induced excitotoxicity and were more susceptible to developmental cell death than wild-type neurons and that Nfia+/– mice were more sensitive to NMDA-induced intrastriatal lesions than were wild-type animals. These results identify NFI-A as what we believe to be a novel neuroprotective transcription factor with implications in neuroprotection and neuronal plasticity following NMDA receptor activation.

NFI-A is induced by neuroprotective models in vitro. 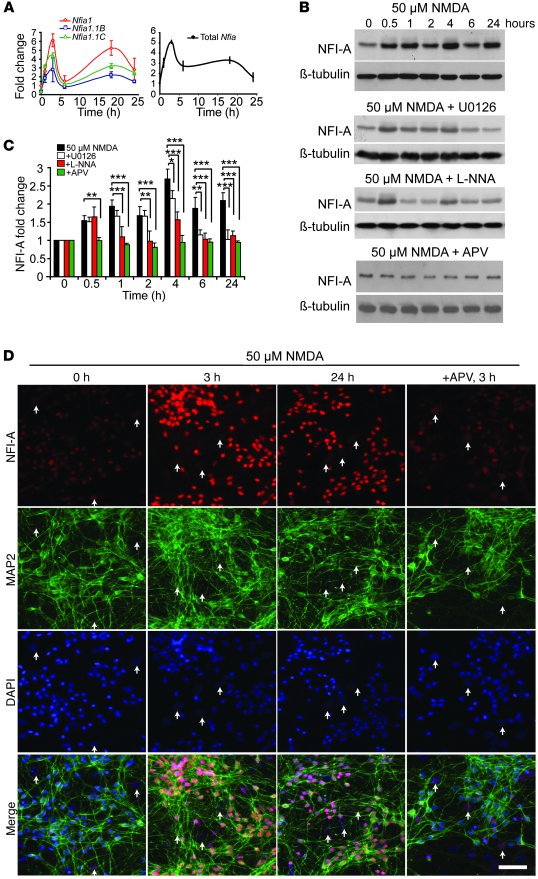