Cross-reactivity of murine and recently human CD8+ T cells between different viral peptides, i.e., heterologous immunity, has been well characterized. However, the directionality and quality of these cross-reactions is critical in determining their biological importance. Herein we analyzed the response of human CD8+ T cells that recognize both a hepatitis C virus peptide (HCV-NS3) and a peptide derived from the influenza neuraminidase protein (Flu-NA). To detect the cross-reactive CD8+ T cells, we used peptide-MHC class I complexes (pMHCs) containing a new mutant form of MHC class I able to bind CD8 more strongly than normal MHC class I complexes. T cell responses against HCV-NS3 and Flu-NA peptide were undetectable in normal donors. In contrast, some responses against the Flu-NA peptide were identified in HCV+ donors who showed strong HCV-NS3–specific reactivity. The Flu-NA peptide was a weak agonist for CD8+ T cells in HCV+ individuals on the basis of novel pMHCs and functional assays. These data support the idea of cross-reactivity between the 2 peptides, but indicate that reactivity toward the Flu-NA peptide is highly CD8-dependent and occurs predominantly after priming during HCV infection. Our findings indicate the utility of the novel pMHCs in dissecting cross-reactivity and suggest that cross-reactivity between HCV and influenza is relatively weak. Further studies are needed to relate affinity and functionality of cross-reactive T cells. 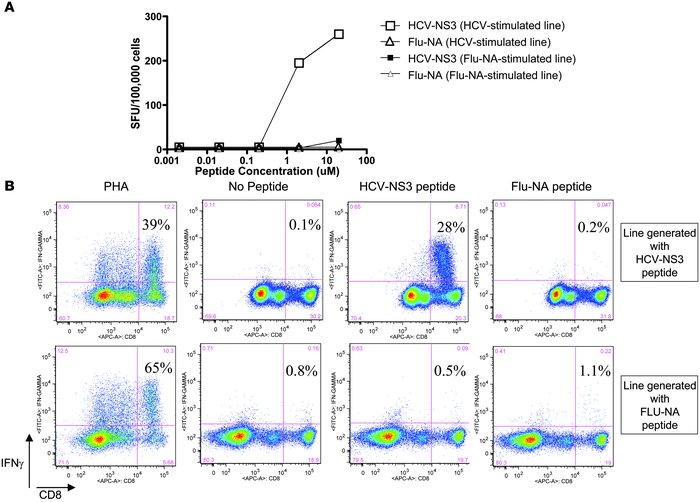 () Short-term T cell line from donor 1144 was generated after restimulation with the HCV-NS3 peptide or the Flu–NA peptide. The lines were tested in an IFN-γ ELISPOT assay () and intracellular cytokine staining assay (). Responses were similar in a line from donor 554.