Williams-Beuren syndrome (WBS), a neurodevelopmental genetic disorder whose manifestations include visuospatial impairment, provides a unique model to link genetically determined loss of neural cell populations at different levels of the nervous system with neural circuits and visual behavior. Given that several of the genes deleted in WBS are also involved in eye development and the differentiation of retinal layers, we examined the retinal phenotype in WBS patients and its functional relation to global motion perception. We discovered a low-level visual phenotype characterized by decreased retinal thickness, abnormal optic disk concavity, and impaired visual responses in WBS patients compared with age-matched controls by using electrophysiology, confocal and coherence in vivo imaging with cellular resolution, and psychophysics. These mechanisms of impairment are related to the magnocellular pathway, which is involved in the detection of temporal changes in the visual scene. Low-level magnocellular performance did not predict high-level deficits in the integration of motion and 3D information at higher levels, thereby demonstrating independent mechanisms of dysfunction in WBS that will require remediation strategies different from those used in other visuospatial disorders. These findings challenge neurodevelopmental theories that explain cortical deficits based on low-level magnocellular impairment, such as regarding dyslexia. 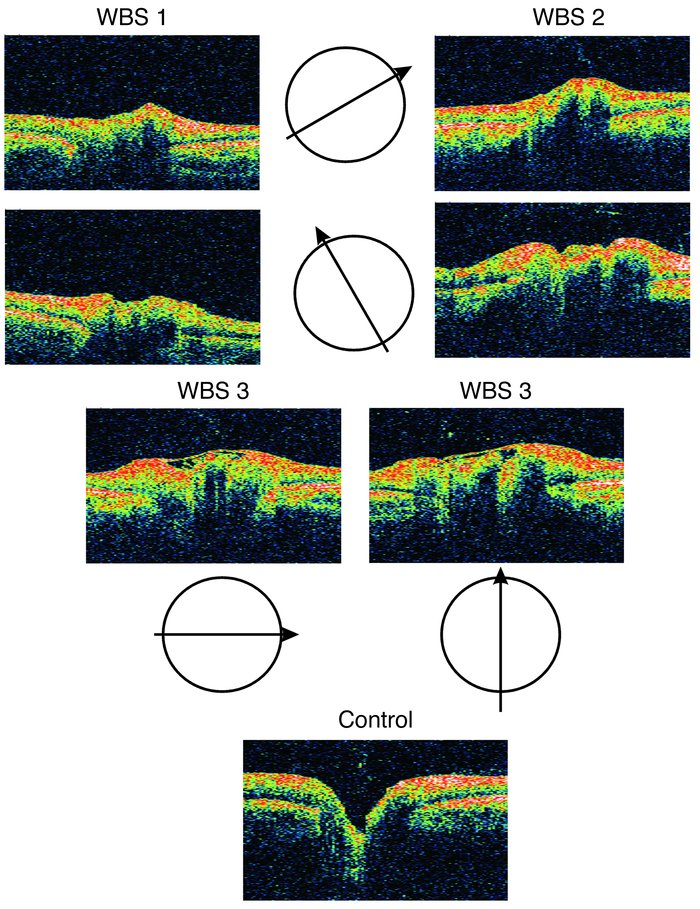 Arrows depict orthogonal axes of optical section. Although we observed that there is a bimodal pattern of deviation in our WBS group (see text), the cup region most often loses concavity, either by obliteration or partial covering by a thin membrane (subject WBS3).