Chain-reaction Ca2+ signaling in the heart

Chain-reaction Ca2+ signaling in the heart

Mutations in Ca2+-handling proteins in the heart have been linked to exercise-induced sudden cardiac death. The best characterized of these have been mutations in the cardiac Ca2+ release channel known as the ryanodine receptor type 2 (RyR2). RyR2 mutations cause “leaky” channels, resulting in diastolic Ca2+ leak from the sarcoplasmic reticulum (SR) that can trigger fatal cardiac arrhythmias during stress. In this issue of the JCI, Song et al. show that mutations in the SR Ca2+-binding protein calsequestrin 2 (CASQ2) in mice result not only in reduced CASQ2 expression but also in a surprising, compensatory elevation in expression of both the Ca2+-binding protein calreticulin and RyR2, culminating in premature Ca2+ release from cardiac myocytes and stress-induced arrhythmia (see the related article beginning on page 1814). In the context of these findings and other recent reports studying CASQ2 mutations, we discuss how CASQ2 influences the properties of Ca2+-dependent regulation of RyR2 and how this contributes to cardiac arrhythmogenesis. 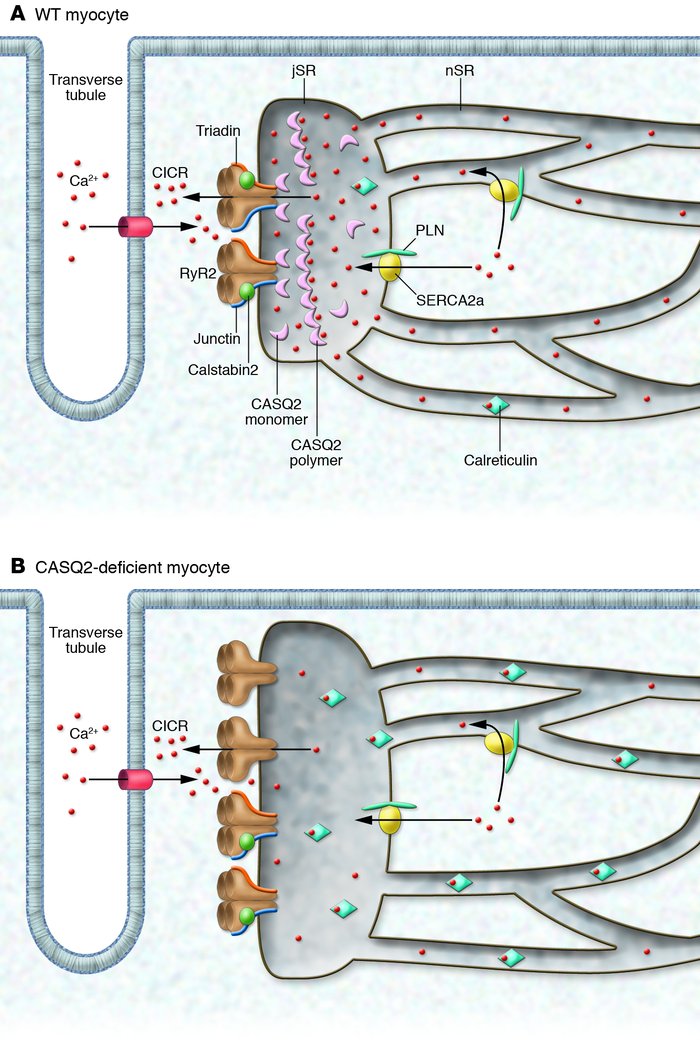 () Calcium transients begin with the initial influx of Ca2+ via L-type Ca2+ channels followed by Ca2+ release from the SR via RyR2s, which culminates in contraction. During relaxation, Ca2+ reuptake occurs via the PLN-regulated Ca2+ pump SERCA2a. The major Ca2+ buffering protein in the SR is CASQ2. High [Ca2+]SR converts monomeric CASQ2 (bound to the RyR2-triadin-junctin complex) to the polymeric CASQ2 form that buffers Ca2+ and remains close to the complex in the jSR. Calstabin2 and monomeric CASQ2 bind to the complex and stabilize RyR2 activity. () Altered Ca2+ handling in CASQ2-deficient myocytes. As Song et al. report (), in CASQ2-deficient mouse myocytes, RyR2 expression is significantly upregulated and calreticulin abundance is slightly increased. There is a decrease in Ca2+ in the SR. Despite altered Ca2+ handling in these animals under resting conditions, these compensatory changes in protein expression appear to help maintain relatively normal heart function. However, under catecholamine- or exercise-induced stress, RyR2 instability increases, leading to an increased risk of cardiac arrhythmia. nSR, nonjunctional SR.