Recently, the small protein α hemoglobin–stabilizing protein (AHSP) was identified and found to specifically bind α-globin, stabilize its structure, and limit the toxic effects of excess α-globin, which are manifest in the inherited blood disorder β thalassemia. In this issue of the JCI, Yu, Weiss, and colleagues show that AHSP is also critical to the formation and stabilization of normal amounts of hemoglobin, even when α-globin is deficient, indicating unique and previously unidentified roles for this molecule (see the related article beginning on page 1856).

Hb formation with and without AHSP. 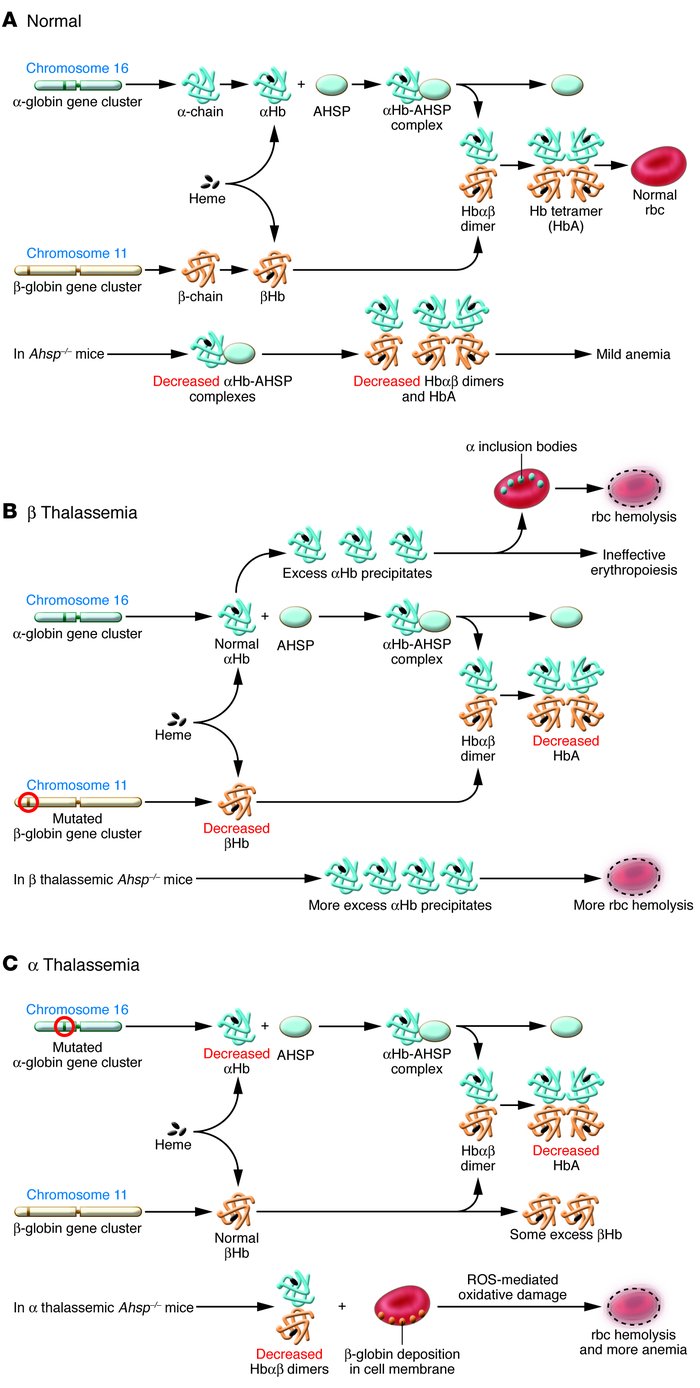 () In normal cells, the α locus on chromosome 16 and β locus on chromosome 11 produce αand β mRNA and α- and β-globin polypeptides, respectively, which combine with the heme moiety to form Hb dimers (Hbαβ). Two Hbαβ dimers combine and form the Hb tetramer HbA. AHSP stabilizes and solubilizes newly formed and excess α-globin chains as apo-α-globin and αHb. The absence of AHSP normally leads to a mild anemia due to precipitated unstabilized α chains (not shown). () In β thalassemia, there is excess α-globin formation due to decreased or absent β-globin production. The excess α-globin precipitates in the cells and on membranes and leads to ineffective erythropoiesis in nucleated red cells in the bone marrow and red cell hemolysis in circulating blood cells. In the absence of AHSP, the anemia is worse because of the further destabilization of the excess α-globin (not shown). () In this issue of the , Yu et al. () show that in mice with α thalassemia, there is an excess of β-globin chains due to a deficiency of α-globin, and mild anemia. In α thalassemia in the absence of AHSP, β-globin precipitates in red cell membranes, presumably because the α-globin–AHSP complex is a required intermediate for optimal HbA formation.