Cystic fibrosis (CF) is caused by dysfunction of the CF transmembrane conductance regulator (CFTR), an anion channel whose dysfunction leads to chronic bacterial and fungal airway infections via a pathophysiological cascade that is incompletely understood. Airway glands, which produce most airway mucus, do so in response to both acetylcholine (ACh) and vasoactive intestinal peptide (VIP). CF glands fail to secrete mucus in response to VIP, but do so in response to ACh. Because vagal cholinergic pathways still elicit strong gland mucus secretion in CF subjects, it is unclear whether VIP-stimulated, CFTR-dependent gland secretion participates in innate defense. It was recently hypothesized that airway intrinsic neurons, which express abundant VIP and ACh, are normally active and stimulate low-level gland mucus secretion that is a component of innate mucosal defenses. Here we show that low levels of VIP and ACh produced significant mucus secretion in human glands via strong synergistic interactions; synergy was lost in glands of CF patients. VIP/ACh synergy also existed in pig glands, where it was CFTR dependent, mediated by both Cl– and HCO3–, and clotrimazole sensitive. Loss of “housekeeping” gland mucus secretion in CF, in combination with demonstrated defects in surface epithelia, may play a role in the vulnerability of CF airways to bacterial infections. 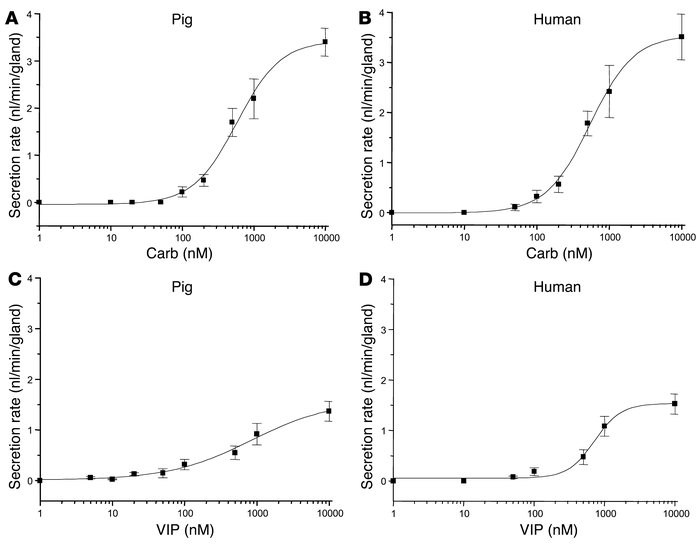