Cardiac hypertrophy is a major cause of human morbidity and mortality. Although much is known about the pathways that promote hypertrophic responses, mechanisms that antagonize these pathways have not been as clearly defined. Atrogin-1, also known as muscle atrophy F-box, is an F-box protein that inhibits pathologic cardiac hypertrophy by participating in a ubiquitin ligase complex that triggers degradation of calcineurin, a factor involved in promotion of pathologic hypertrophy. Here we demonstrated that atrogin-1 also disrupted Akt-dependent pathways responsible for physiologic cardiac hypertrophy. Our results indicate that atrogin-1 does not affect the activity of Akt itself, but serves as a coactivator for members of the Forkhead family of transcription factors that function downstream of Akt. This coactivator function of atrogin-1 was dependent on its ubiquitin ligase activity and the deposition of polyubiquitin chains on lysine 63 of Foxo1 and Foxo3a. Transgenic mice expressing atrogin-1 in the heart displayed increased Foxo1 ubiquitylation and upregulation of known Forkhead target genes concomitant with suppression of cardiac hypertrophy, while mice lacking atrogin-1 displayed the opposite physiologic phenotype. These experiments define a role for lysine 63–linked ubiquitin chains in transcriptional coactivation and demonstrate that atrogin-1 uses this mechanism to disrupt physiologic cardiac hypertrophic signaling through its effects on Forkhead transcription factors. 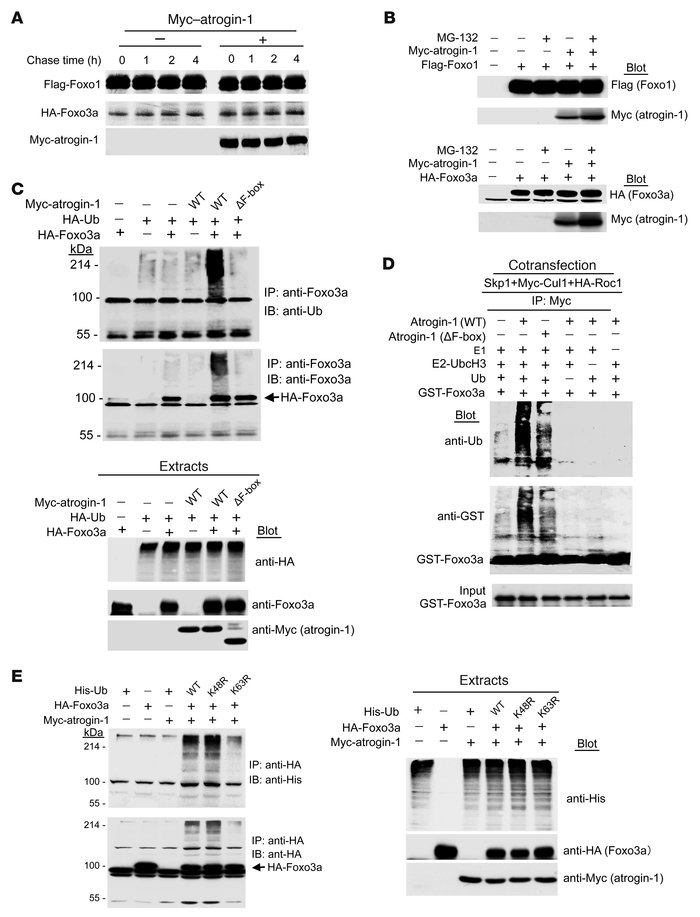