The initiation of mammalian puberty and the maintenance of female reproductive cycles are events controlled by hypothalamic neurons that secrete the decapeptide gonadotropin-releasing hormone (GnRH). GnRH secretion is, in turn, controlled by changes in neuronal and glial inputs to GnRH-producing neurons. The hierarchical control of the process is unknown, but it requires coordinated regulation of these cell-cell interactions. Here we report the functional characterization of a gene (termed enhanced at puberty 1 [EAP1]) that appears to act as an upstream transcriptional regulator of neuronal networks controlling female reproductive function. EAP1 expression increased selectively at puberty in both the nonhuman primate and rodent hypothalamus. EAP1 encoded a nuclear protein expressed in neurons involved in the inhibitory and facilitatory control of reproduction. EAP1 transactivated genes required for reproductive function, such as GNRH1, and repressed inhibitory genes, such as preproenkephalin. It contained a RING finger domain of the C3HC4 subclass required for this dual transcriptional activity. Inhibition of EAP1 expression, targeted to the rodent hypothalamus via lentivirus-mediated delivery of EAP1 siRNAs, delayed puberty, disrupted estrous cyclicity, and resulted in ovarian abnormalities. These results suggest that EAP1 is a transcriptional regulator that, acting within the neuroendocrine brain, contributes to controlling female reproductive function.

mRNA abundance increases in the nonhuman primate and rat hypothalamus at the time of puberty. 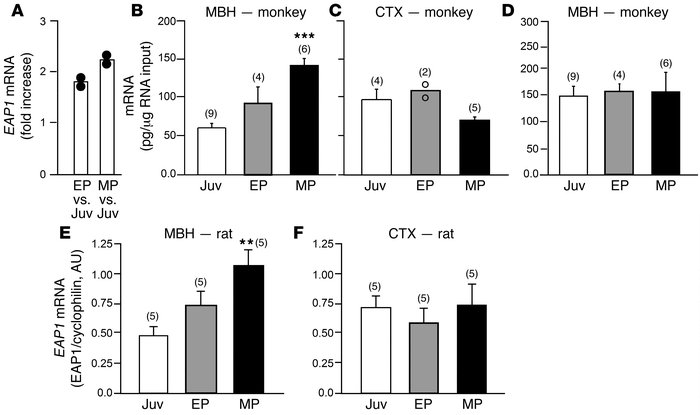 () Puberty-related increase in mRNA content in the hypothalamus of female rhesus monkeys detected using human cDNA microarrays. Changes in mRNA content are expressed as fold increase over values present in prepubertal juvenile (Juv) animals. EP, early puberty; MP, mid-puberty. () mRNA abundance increases in the MBH of female rhesus monkeys at the time of puberty, as assessed by real-time PCR. () mRNA content does not increase in the CTX. *** < 0.01 versus Juv control. () Abundance of the mRNA encoding the EAP1 homolog CAB45750 does not change in the MBH at the time of puberty. mRNA content increases in the MBH (), but not in the CTX (), of female rats at the time of puberty, as assessed by semiquantitative PCR. Numbers above bars represent number of animals per group, and error bars are SEM. ** < 0.02 versus Juv control. Filled circles in represent the range of values reported in the 2 microarrays and that were subsequently used to compare EP and MP animals with the Juv group; open circles in panel represent the individual values of the only 2 animals used in this group.