Cytochrome P450 1A1 (CYP1A1) is one of the most important detoxification enzymes due to its broad substrate specificity and wide distribution throughout the body. On the other hand, CYP1A1 can also produce highly carcinogenic intermediate metabolites through oxidation of polycyclic aromatic hydrocarbons. We describe what we believe to be a novel regulatory system for whole-body CYP1A1 expression by a factor originating in the gut. A mutant mouse was generated in which the arylhydrocarbon receptor nuclear translocator (Arnt) gene is disrupted predominantly in the gut epithelium. Surprisingly, CYP1A1 mRNA expression and enzymatic activities were markedly elevated in almost all non-gut tissues in this mouse line. The induction was even observed in early-stage embryos in pregnant mutant females. Interestingly, the upregulation was CYP1A1 selective and lost upon administration of a synthetic purified diet. Moreover, the increase was recovered by addition of the natural phytochemical indole-3-carbinol to the purified diet. These results suggest that an Arnt-dependent pathway in gut has an important role in regulation of the metabolism of dietary CYP1A1 inducers and whole-body CYP1A1 expression. This machinery might be involved in naturally occurring carcinogenic processes and/or other numerous biological responses mediated by CYP1A1 activity.

Intestinal epithelium–specific disruption of the gene. 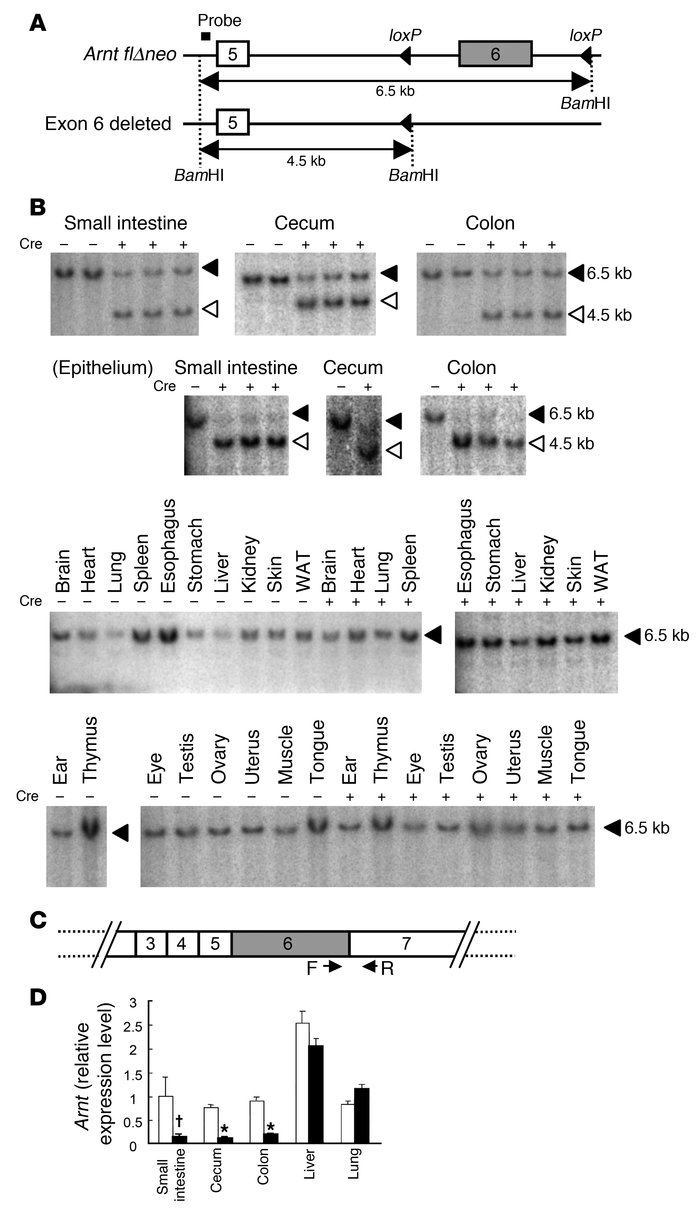 () Schematic structure of modified allele used in this study. The probe used for Southern blot analysis is indicated. () Southern blot analysis for the detection of the disrupted allele. Signals corresponding to the Δ allele and exon 6–deleted allele () are indicated by filled and open triangles, respectively. Cre+ or Cre– indicates the existence or absence of the Cre recombinase in the genome. WAT, white adipose tissue. () Primers used for detection of intact transcripts. () Relative expression levels of intact transcripts in the intestine, liver, and lung examined by qPCR. White and black bars represent the expression levels in ArntF/F and ArntΔIE mice, respectively. Average values for each group ( = 4) are shown. Relative values were calculated from the average expression level in the small intestine of the ArntF/F mice with FVB/N background defined as general standard (1.0). Error bars indicate SEM. Statistical significance between the average values for ArntF/F and ArntΔIE mice in the same tissue was examined. * < 0.05; † < 0.05.