Accumulation of cholesteryl esters (CEs) in macrophage foam cells, central to atherosclerotic plaque formation, occurs as a result of imbalance between the cholesterol influx and efflux pathways. While the uptake, or influx, of modified lipoproteins is largely unregulated, extracellular acceptor-mediated free cholesterol (FC) efflux is rate limited by the intracellular hydrolysis of CE. We previously identified and cloned a neutral CE hydrolase (CEH) from human macrophages and demonstrated its role in cellular CE mobilization. In the present study, we examined the hypothesis that macrophage-specific overexpression of CEH in atherosclerosis-susceptible Ldlr–/– mice will result in reduction of diet-induced atherosclerosis. Transgenic mice overexpressing this CEH specifically in the macrophages (driven by scavenger receptor promoter/enhancer) were developed and crossed into the Ldlr–/– background (Ldlr–/–CEHTg mice). Macrophage-specific overexpression of CEH led to a significant reduction in the lesion area and cholesterol content of high-fat, high-cholesterol diet–induced atherosclerotic lesions. The lesions from Ldlr–/–CEHTg mice did not have increased FC, were less necrotic, and contained significantly higher numbers of viable macrophage foam cells. Higher CEH-mediated FC efflux resulted in enhanced flux of FC from macrophages to gall bladder bile and feces in vivo. These studies demonstrate that by enhancing cholesterol efflux and reverse cholesterol transport, macrophage-specific overexpression of CEH is antiatherogenic. 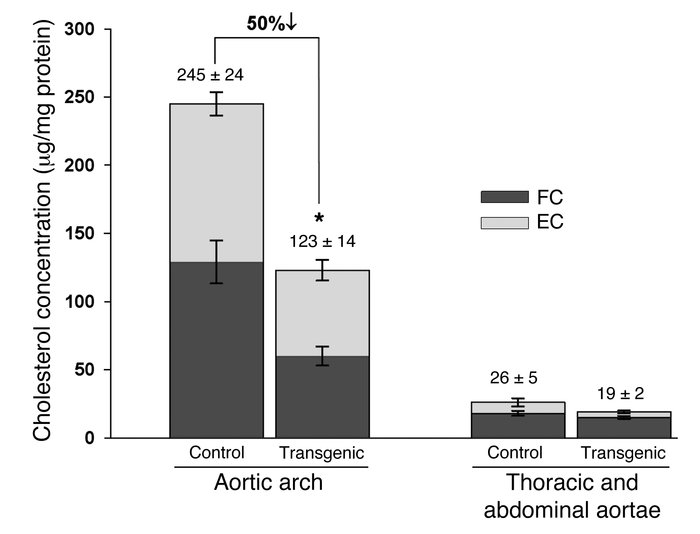 Aortae (from aortic sinus to the iliac bifurcation) were isolated, opened, and pinned to expose the lesions. After fixing in buffered formaldehyde for 24 hours, the aortic arch was cut along the line as shown in Figure and lipids extracted from the resulting 2 pieces corresponding to the arch and the thoracic and abdominal aortae. FC and EC concentration (μg/mg protein) was determined as described in Methods. The concentration of total cholesterol is indicated at the top of the bars. Data are expressed as mean ± SEM ( = 6). * < 0.004.