In blood vessels, endothelia are submitted to constant shear effects and are, under normal conditions, capable of responding to any variation in hemodynamic forces. Caveolae — 50- to 100-nm plasma membrane invaginations present at the surface of terminally differentiated cells and particularly enriched in ECs — are composed of a high sphingolipid and cholesterol content and the protein caveolin-1 (Cav-1). Previous studies have suggested that caveolae and endothelial Cav-1 may regulate the vascular response to altered shear stress. In this issue of the JCI, Yu et al. have examined the role of Cav-1/caveolae in the regulation of flow-induced alterations (i.e., mechanotransduction) in vessels from wild-type mice, Cav-1–deficient mice, and Cav-1–deficient mice re-expressing Cav-1 only in ECs. Their data suggest that caveolae/Cav-1 may act as sensors of altered shear stress and that they also organize the signaling response in stimulated ECs (see the related article beginning on page 1284). 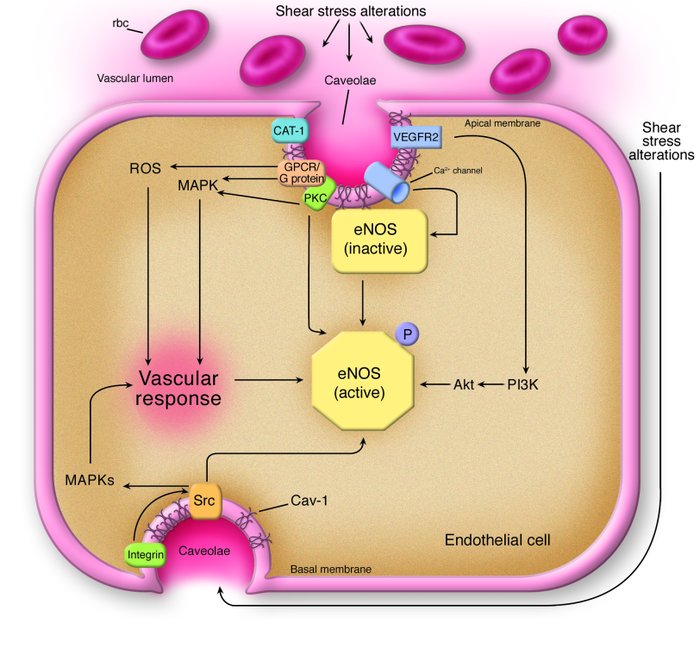 According to Yu et al. (), caveolae and Cav-1 appear to be involved in some of the earliest steps associated with the detection of altered shear stress conditions in blood vessels. In addition, the vascular response (see Figure ) is induced via caveolae and Cav-1, as demonstrated for several signaling pathways. Cav-1 plays important roles in regulating eNOS function. In unstimulated cells, eNOS is maintained in an inactive state through its association with Cav-1. Upon stimulation (e.g., shear stress), Cav-1 and caveolae may allow for the proper organization of various signal transduction pathways or organize the different regulatory proteins necessary for rapid and efficient eNOS activation. Calcium channels and the arginine transporter CAT-1 are localized to caveolae and may therefore allow for efficient eNOS activation (Ca2+ entry and dissociation from Cav-1 in the presence of calmodulin) and availability of substrate. Further activation is also possible via the PI3K and Akt signaling pathways, which enhance NO production following eNOS phosphorylation. Activation of the VEGFR2 signaling pathway is critical for PI3K/Akt activation, but other pathways appear to also mediate MAPK activation (ERK1/2 in particular). These pathways also involve G protein–coupled receptors (GPCRs) and G proteins. Shear stress is associated with increased oxidative stress conditions that lead to the production of ROS. Additionally, shear stress may affect EC interactions with extracellular matrix proteins. This may in turn activate integrin-mediated signaling pathways via caveolae. Src may also directly alter eNOS activity by inducing tyrosine phosphorylation (). Note that only the major affected signal transduction pathways are shown.