The alchemy of tendon repair: a primer for the (S)mad scientist

The alchemy of tendon repair: a primer for the (S)mad scientist

During vertebrate development, mesenchymal progenitors capable of forming bone, cartilage, muscle, fat, or tendon arise from either neural crest or somitic mesoderm. Transcriptional programs that specify mesenchymal cell fates are initiated and modified by paracrine cues provided by TGF-β superfamily members and mediated in part via the regulated assembly of Smad-containing multiprotein transcription factor complexes. In this issue of the JCI, Hoffmann and colleagues have identified that Smad8 activation drives tendon formation from C3H10T1/2 cells, a murine cell line that recapitulates many features of normal multipotent mesenchymal cells (see the related article beginning on page 940). Cells programmed to the tenocyte cell fate in vitro formed tenogenic grafts in vivo. These results add to the accumulating evidence that proliferating, multipotent mesenchymal progenitor cells can be programmed to yield multiple cell types — e.g., osteoblasts, myocytes, chondrocytes, and tenocytes — that may be useful in cell-based therapeutic approaches to musculoskeletal diseases. 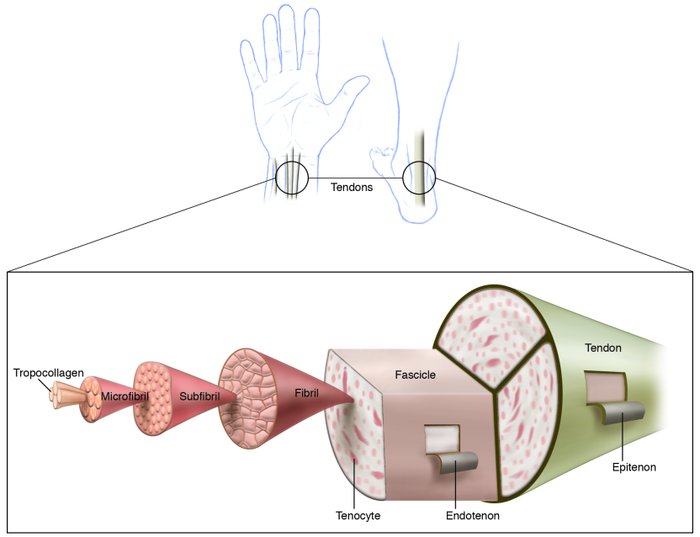 Tendon is a nonmineralized, dense regular connective tissue that consists primarily of type I collagen. The major executive cell type of tendon, the tenocyte, synthesizes and secretes trihelical tropocollagen that is assembled and cross-linked in parallel fibrillar arrays. Higher-order organization of these arrays is provided by the endotenon, a loose connective tissue layer that envelopes collagen fibrils to form tendon fascicles. Fascicles in turn are bundled together by the epitenon, a layer contiguous with the endotenon through which the microvasculature traverses and provides nutrient supply (, ). Dependent upon anatomic venue, the tendon either may (e.g., hand flexor tendon) or may not (e.g., Achilles tendon) be housed within a synovial sheath (, ).