Estrogens influence many physiological processes in mammals, including but not limited to reproduction, cardiovascular health, bone integrity, cognition, and behavior. Given this widespread role for estrogen in human physiology, it is not surprising that estrogen is also implicated in the development or progression of numerous diseases, which include but are not limited to various types of cancer (breast, ovarian, colorectal, prostate, endometrial), osteoporosis, neurodegenerative diseases, cardiovascular disease, insulin resistance, lupus erythematosus, endometriosis, and obesity. In many of these diseases, estrogen mediates its effects through the estrogen receptor (ER), which serves as the basis for many therapeutic interventions. This Review will describe diseases in which estrogen, through the ER, plays a role in the development or severity of disease. 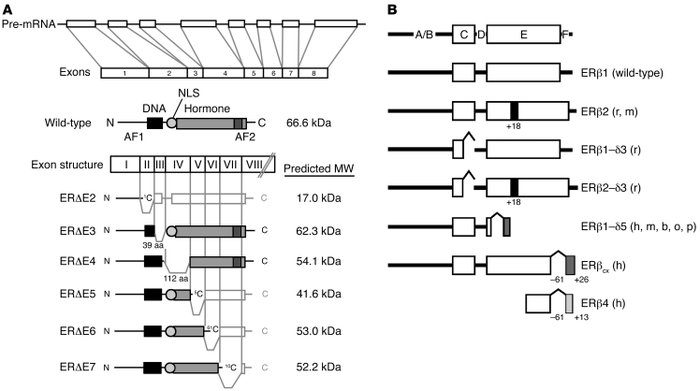 Exon structure, primary transcript, and common mRNA splice variants of the ER. () The most common splice variants of ERα are expressed in multiple tissues and arise from deletions of internal exons, resulting in truncated proteins lacking segments of the DNA-binding domain (DBD) or hormone-binding (ligand-binding) domain (LBD) of the receptor. Most variant isoforms possess little transcriptional activity, with the exception of ER&Dgr;E5, which binds DNA but lacks most of the LBD, resulting in low levels of constitutive activity in some cell lines. ER&Dgr;E2 lacks the DBD and the dimerization domain, while ER&Dgr;E3 lacks part of the DBD. ER&Dgr;E4, which lacks part of the LBD, does not bind DNA or hormone, and ER&Dgr;E6 is missing part of the LBD and dimerization domain. ER&Dgr;E7 lacks the activation function 2 (AF2) domain and part of the LBD. ER&Dgr;E3, ER&Dgr;E5, and ER&Dgr;E7 variants have demonstrated a dominant-negative effect on transcriptional activity mediated by wild-type ER. Adapted with permission from (S33). () Mammalian ERβ variants identified in humans (h), rats (r), mice (m), cows (b), sheep (o), and pigs (p). As described for ERα, wild-type ERβ (ERβ1) possesses both a DBD (C domain) and an LBD (E domain). ERβ2 codes for a variant that contains an additional 18 amino acids in the LBD, while ERβ1-δ3 lacks exon 3 and therefore part of the DBD. ERβ2-δ3 contains both of these variations. ERβ1-δ5 lacks exon 5, and in ERβCX, the C-terminal 61 amino acids are replaced by a unique sequence of 26 amino acids. ERβ4 is truncated at both the N and the C termini. In humans, variants lacking exon 2, exon 4, exon 6, and exon 7 also exist. Adapted from ref. S34.