One approach to enhancing the T cell response to tumors is vaccination with mimotopes, mimics of tumor epitopes. While mimotopes can stimulate proliferation of T cells that recognize tumor-associated antigens (TAAs), this expansion does not always correlate with control of tumor growth. We hypothesized that vaccination with mimotopes of optimal affinity in this interaction will improve antitumor immunity. Using a combinatorial peptide library and a cytotoxic T lymphocyte clone that recognizes a TAA, we identified a panel of mimotopes that, when complexed with MHC, bound the TAA-specific TCR with a range of affinities. As expected, in vitro assays showed that the affinity of the TCR-peptide-MHC (TCR-pMHC) interaction correlated with activity of the T cell clone. However, only vaccination with mimotopes in the intermediate-affinity range elicited functional T cells and provided protection against tumor growth in vivo. Vaccination with mimotopes with the highest-affinity TCR-pMHC interactions elicited TAA-specific T cells to the tumor, but did not control tumor growth at any of the peptide concentrations tested. Further analysis of these T cells showed functional defects in response to the TAA. Thus, stimulation of an antitumor response by mimotopes may be optimal with peptides that increase but do not maximize the affinity of the TCR-pMHC interaction. 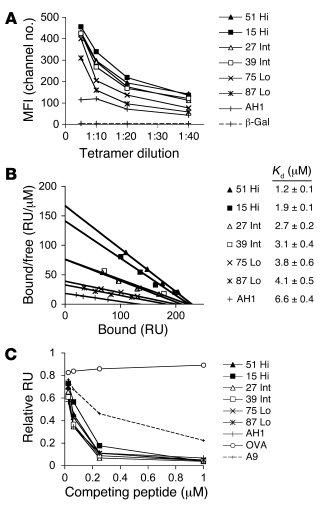 () Relative avidities of the TCR-pMHC interactions were determined by staining a T cell clone that recognizes the AH1 peptide with increasing concentrations of Ld-tet incubated with the indicated peptides. The H-2Ld–restricted β-gal peptide () did not bind the TCR from the T cell clone. Data are presented as mean fluorescence intensity (MFI) and are representative of 3 independent experiments. () Affinity binding analysis of the pMHC complexes for the TCR from the T cell clone were determined using SPR. Increasing concentrations of soluble H-2Ld monomers incubated with peptide were exposed to the immobilized TCR on a biosensor surface. Equilibrium-binding measurements were used to construct Scatchard plots. d values were calculated by nonlinear regression analysis of the response units plotted against H-2Ld concentration (Prism, version 4.0; GraphPad Software). () Relative affinities of the peptides for H-2Ld were determined using competition assays. The indicated peptide concentrations and 40 μM monomeric H-2Ld were exposed to the immobilized pMCMV-C4 peptide on a biosensor surface. The amount of H-2Ld bound to pMCMV-C4 is reflected by the change in RU after 1 minute. Data are presented as RU relative to binding of empty H-2Ld to the MCMV-C4 peptide. Hi, high affinity; Int, intermediate affinity; Lo, low affinity.