Insulin receptor substrates, including Irs1 and Irs2, integrate insulin and IGF receptor signals with heterologous pathways to coordinate growth and metabolism. Since Irs2 is thought to be especially important in hepatic nutrient homeostasis, we deleted Irs1 from hepatocytes of WT mice (called LKO) or genetically insulin-resistant Irs1–/– mice (called LKO::Irs1–/–). Viable LKO::Irs1–/– mice were 70% smaller than WT or LKO mice, and 40% smaller than Irs1–/– mice. Hepatic insulin receptors were functional in all the mice, but insulin signaling via the Akt—FoxO1 pathway was reduced in Irs1–/– and LKO liver, and undetected in LKO::Irs1–/– liver; however, Gsk3β phosphorylation (Ser9) and hepatic glycogen stores were nearly normal in all of the mice. LKO and Irs1–/– mice developed insulin resistance and glucose intolerance that never progressed to diabetes, whereas LKO::Irs1–/– mice developed hyperglycemia and hyperinsulinemia immediately after birth. Regardless, few hepatic genes changed expression significantly in Irs1–/– or LKO mice, whereas hundreds of genes changed in LKO::Irs1–/– mice — including elevated levels of Pck1, G6pc, Ppargc1, Pparg, and Igfbp1. Thus, signals delivered by Irs1 or Irs2 regulate hepatic gene expression that coordinates glucose homeostasis and systemic growth. 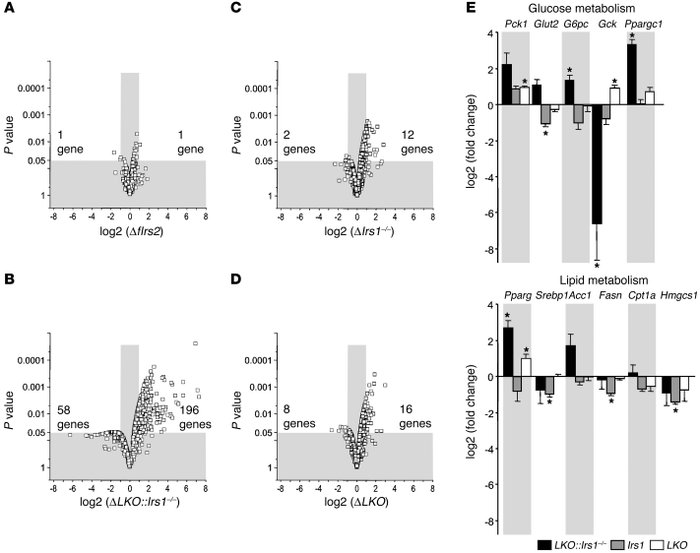 GeneChips. The mRNA was isolated from the livers of overnight-fasted WT, , , , and mice (2 mice per genotype). Each sample was labeled and analyzed on Affymetrix Mouse Genome 430 2.0 GeneChips at the Harvard Medical School Biopolymers Facility. ANOVA without a multiple testing correction identified 1,414 probe sets that changed significantly ( < 0.05) across all of the groups, and a 1-sample Student’s test was used to determine whether the mean normalized expression value for each of the 1,414 probes was statistically different from the WT control. (–) The value for each probe set was plotted against its fold change (Δ) , , , and . Probe sets falling outside the gray zone ( < 0.05 and at least a 2-fold change) are listed in Table . () Real-time PCR was used to estimate the expression of several candidate genes known to play a role in hepatic glucose homeostasis — , , , , and — or lipid homeostasis — , , , , carnitine palmitoyltransferase 1a (), and . Data represent the average of replicate determinations from fasted mouse liver extracts normalized against 18S. Expression relative to the liver is presented by log 2 (fold change). * < 0.05 (ANOVA).