DC-specific ICAM3-grabbing non-integrin (DC-SIGN), which is expressed on DCs, can interact with a variety of pathogens such as HIV-1, hepatitis C, Ebola, cytomegalovirus, Dengue virus, Mycobacterium, Leishmania, and Candida albicans. We demonstrate that human milk can inhibit the DC-SIGN–mediated transfer of HIV-1 to CD4+ T lymphocytes as well as viral transfer by both immature and mature DCs. The inhibitory factor directly interacted with DC-SIGN and prevented the HIV-1 gp120 envelope protein from binding to the receptor. The human milk proteins lactoferrin, α-lactalbumin, lysozyme, β-casein, and secretory leukocyte protease inhibitor did not bind DC-SIGN or demonstrate inhibition of viral transfer. The inhibitory effect could be fully alleviated with an Ab recognizing the Lewis X (LeX) sugar epitope, commonly found in human milk. LeX in polymeric form or conjugated to protein could mimic the inhibitory activity, whereas free LeX sugar epitopes could not. We reveal that a LeX motif present in human milk can bind to DC-SIGN and thereby prevent the capture and subsequent transfer of HIV-1 to CD4+ T lymphocytes. The presence of such a DC-SIGN–binding molecule in human milk may both influence antigenic presentation and interfere with pathogen transfer in breastfed infants. 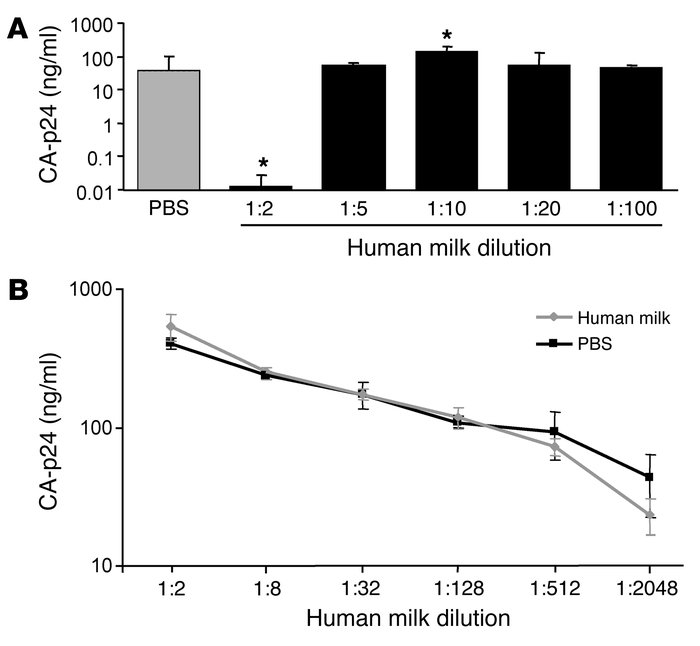