Over the last decade, an abundance of evidence has emerged demonstrating a close link between metabolism and immunity. It is now clear that obesity is associated with a state of chronic low-level inflammation. In this article, we discuss the molecular and cellular underpinnings of obesity-induced inflammation and the signaling pathways at the intersection of metabolism and inflammation that contribute to diabetes. We also consider mechanisms through which the inflammatory response may be initiated and discuss the reasons for the inflammatory response in obesity. We put forth for consideration some hypotheses regarding important unanswered questions in the field and suggest a model for the integration of inflammatory and metabolic pathways in metabolic disease. 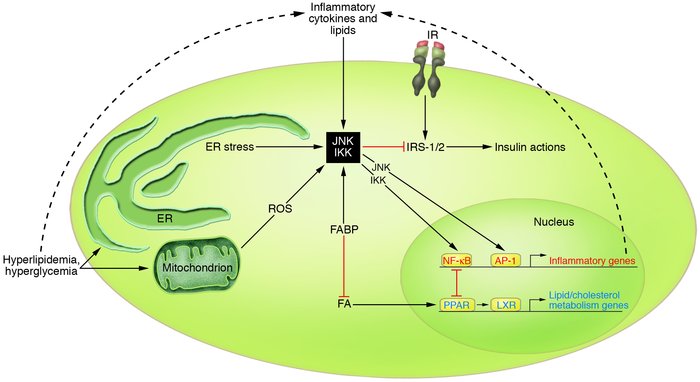 Model of overlapping metabolic and inflammatory signaling and sensing pathways in adipocytes or macrophages. Inflammatory pathways can be initiated by extracellular mediators such as cytokines and lipids or by intracellular stresses such as ER stress or excess ROS production by mitochondria. Signals from all of these mediators converge on inflammatory signaling pathways, including the kinases JNK and IKK. These pathways lead to the production of additional inflammatory mediators through transcriptional regulation as well as to the direct inhibition of insulin signaling. Other pathways such as those mediated through the SOCS proteins and iNOS are also involved in inflammation-mediated inhibition of insulin action. Opposing the inflammatory pathways are transcription factors from the PPAR and LXR families, which promote nutrient transport and metabolism and antagonize inflammatory activity. More proximal regulation is provided by FABPs, which likely sequester ligands of these transcription factors, thus promoting a more inflammatory environment. The absence of FABPs is antiinflammatory. The cell must strike a balance between metabolism and inflammation. In conditions of overnutrition, this becomes a particular challenge, as the very processes required for response to nutrients and nutrient utilization, such as mitochondrial oxidative metabolism and increasing protein synthesis in the ER, can induce the inflammatory response. IR, insulin receptor.