In pancreatic β cells, not only insulin exocytosis per se, but translocation of β granules toward the plasma membrane — an event upstream of exocytosis — are under the control of glucose. However, the molecular basis of this translocation has been poorly understood. Rab27a-mediated translocation of glucose-induced β granules is reported in this issue of the JCI. Rab27a or its effector molecule may constitute a novel pharmacological target because potentiation of the Rab27a pathway is expected to restore β cell glucose competency in patients with diabetes mellitus. 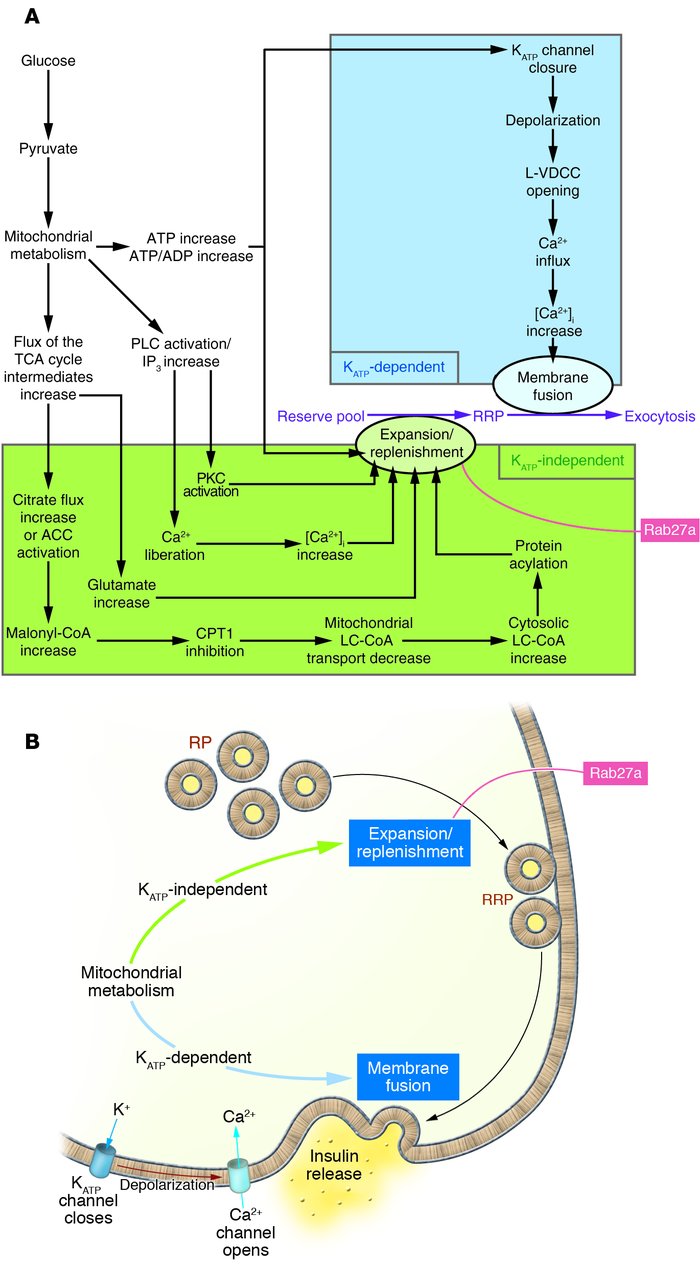 Metabolism-secretion coupling within the pancreatic β cell. ( and ) Elevation of ATP and ATP/ADP is the starting point for KATP channel–dependent signaling, which has been well elucidated, as shown here (). Owing to [Ca2+]i elevation, fusion of β granules in the RRP and the plasma membrane takes place, and this results in the first phase of glucose-induced insulin secretion. The molecular basis for KATP channel–independent signaling () is not fully characterized. The end point of this signaling is expansion and/or replenishment of the RRP, after which a second phase occurs in which insulin release gradually increases. Upon glucose stimulation, KATP channel–dependent and –independent events take place. When an experimental protocol to detect time-dependent potentiation is employed (, ), expansion of the RRP can be quantified. Membrane fusion of the β granules in the RRP is for first-phase insulin release, and, in addition, expansion and/or replenishment of the RRP is for second phase release (see Figure ). As shown in , as a result of anaplerosis (), increased citrate flux () and/or activation of acetyl-CoA carboxylase (ACC) () occurs, which results in expansion and/or replenishment of the RRP via the series of events indicated (10–12). Cytosolic flux of glutamate, by virtue of its uptake by β granules, sensitizes the granules for fusion (). Activation of phospholipase C (PLC), PKC, or an increase in inositol trisphosphate (IP3) () and liberation of stored Ca2+ () also yield expansion and/or replenishment. ATP itself () and elevation of ATP/ADP () are also involved in this process. In this issue of the , Kasai et al. () report that Rab27a plays a critical role in replenishment of the RRP. CPT1, carnitine palmitoyl transferase 1; L-VDCC, L-type voltage-dependent Ca2+ channel.