Regeneration of the pancreatic β cell

Regeneration of the pancreatic β cell

Type 1 diabetes is the result of an autoimmune attack against the insulin-producing β cells of the endocrine pancreas. Current treatment for patients with type 1 diabetes typically involves a rigorous and invasive regimen of testing blood glucose levels many times a day along with subcutaneous injections of recombinant DNA–derived insulin. Islet transplantation, even with its substantially improved outcome in recent years, is still not indicated for pediatric patients. However, in light of the fact that some regenerative capabilities of the endocrine pancreas have been documented and recent research has shown that human ES cell lines can be derived in vitro, this review discusses whether it is practical or even possible to combine these lines of research to more effectively treat young diabetic patients. 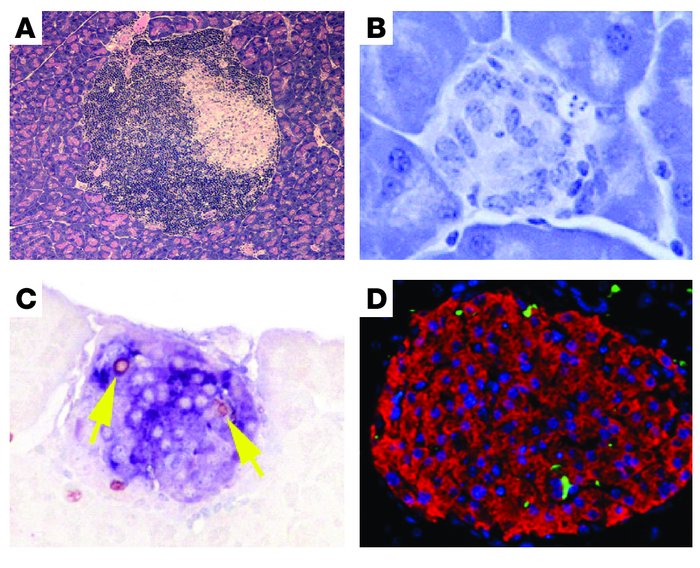 Regeneration of the β cell in diabetic NOD mice. () In NOD mice, the infiltration of autoreactive T cells into the islets of Langerhans (resulting in insulitis) begins at around 4 weeks of age. At 20 to 23 weeks, approximately 85% of female mice are diabetic, i.e., their glycemia is greater than 300 mg/dl. Magnification, ×200. () When it is successfully transplanted with bone marrow from a non–diabetes-prone donor and hematopoietic chimerism is established, the NOD mouse no longer show signs of autoimmune activity. However, while there is no more evidence of insulitis in the endogenous pancreas, there is also no sign of insulin production (no red staining). Magnification, ×400. () Insulin-positive cells in the islets can be seen to be dividing (yellow arrows); i.e., they are insulin (blue) and BrdU (red) positive. Magnification, ×400. () Three to 4 months after bone marrow transplantation, new insulin-positive cells (shown in red) are present throughout the endogenous pancreas. Magnification, ×200. Thus, when the islets transplanted under the kidney capsule in order to maintain euglycemia while regeneration takes place are removed by nephrectomy, the mice remain nondiabetic. Figure reproduced with permission from ().