RIP-ed and ready to dance: new mechanisms for polycystin-1 signaling

RIP-ed and ready to dance: new mechanisms for polycystin-1 signaling

Polycystin-1, the protein encoded by the principal gene involved in autosomal dominant polycystic kidney disease, has been implicated in extracellular sensing as well as in cell-cell and cell-matrix interactions. However, the precise mechanisms involved in polycystin-1 signaling are not well defined. A report in this issue of the JCI demonstrates that the C-terminal tail of polycystin-1 is cleaved from the membrane through regulated intramembrane proteolysis (RIP) and that this domain translocates to the nucleus, where it activates the AP-1 transcription pathway. This translocation appears to be modulated by polycystin-2, with which polycystin-1 is thought to interact. These findings provide what we believe to be the first evidence that polycystin-1 can signal directly to the nucleus and that polycystin-1–polycystin-2 interactions do not require colocalization of these proteins in the same membrane compartment. 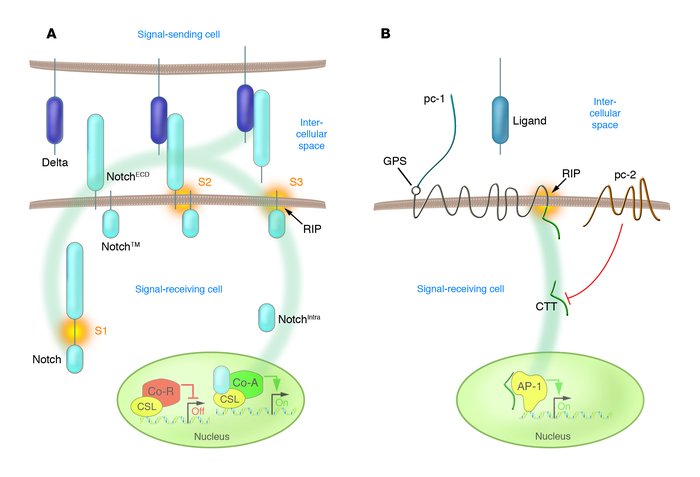 Models of Notch and polycystin-1 signaling via RIP. () Newly synthesized Notch is constitutively cleaved in the -Golgi network by furin-like proteases. Following this site 1 (S1) cleavage event, the bipartite Notch receptor consisting of a noncovalent interaction between the ectodomain (NotchECD) and a membrane-tethered intracellular domain (NotchTM) is inserted into the plasma membrane. Activation of Notch by its ligand, e.g., Delta, triggers 2 additional proteolytic events. S2 cleavage by extracellular proteases of the ADAM/TACE (a disintegrin and metalloproteinase/TNF-––converting enzyme) family releases NotchECD and generates an activated, membrane-bound form of NotchTM that is further processed via RIP-mediated S3 cleavage. These events lead to release of the Notch intracellular domain (NotchIntra), which translocates into the nucleus and displaces the corepressor (Co-R) complex from the CBF-1, Su(H), Lag-1–type (CSL-type) transcription factors. The coactivating (Co-A) complex containing NotchIntra and CSL stimulates expression of CSL/Notch target genes. Figure modified from () with permission from the Company of Biologists Ltd.; and from () with permission from Elsevier. () Polycystin-1 (pc-1) is a cell-surface receptor that undergoes regulated extracellular proteolytic processing at its GPS, which results in the release of its N-terminal fragment. In this issue of the , Chauvet et al. () show that the CTT of polycystin-1 can also be cleaved from its transmembrane anchor, presumably through RIP-related mechanisms. Once released, this domain translocates to the nucleus, where it activates the AP-1 transcription pathway. This translocation event appears to be regulated by polycystin-2.