Determination of the molecular basis of Marfan syndrome: a growth industry

Determination of the molecular basis of Marfan syndrome: a growth industry

Although it has been known for more than a decade that Marfan syndrome — a dominantly inherited connective tissue disorder characterized by tall stature, arachnodactyly, lens subluxation, and a high risk of aortic aneurysm and dissection — results from mutations in the FBN1 gene, which encodes fibrillin-1, the precise mechanism by which the pleiotropic phenotype is produced has been unclear. A report in this issue now proposes that loss of fibrillin-1 protein by any of several mechanisms and the subsequent effect on the pool of TGF-β may be more relevant in the development of Marfan syndrome than mechanisms previously proposed in a dominant-negative disease model. The model proposed in this issue demonstrates several strategies for clinical intervention. 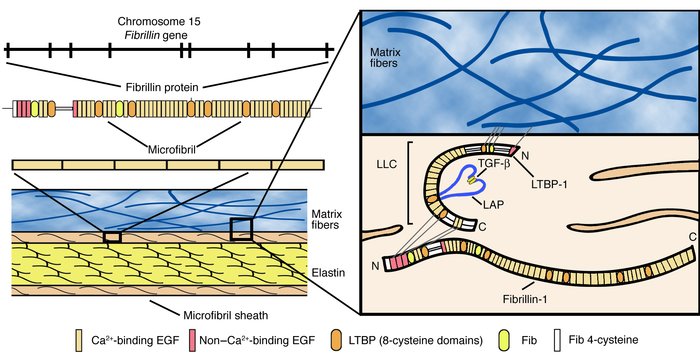 Fibrillin-1 is translated from an mRNA encoded by the gene on chromosome 15. The protein is processed and secreted and then forms microfibrils in the matrix in association with other extracellular molecules. Microfibrils may function alone or form the basis of elastic fibers following deposition of elastin. Among molecules that are associated with fibrillin-1 is LTBP-1, a binding protein for the latent form of TGF-β. TGF-β is expressed as a precursor, which is cleaved to make the active form, but the two peptides remain associated and are then bound by a separate protein, LTBP-1. This complex, known as a large latent complex (LLC) is bound to elements of the extracellular matrix, including fibrillin-1 and other fibrils, and TGF-β is released in response to environmental and molecular signals. Although the traditional model for Marfan syndrome suggests that it is the alterations in the structure of fibrillin-1 that are important, the article by Judge and colleagues in this issue of the () suggests that expression of only half the normal amount of wild-type fibrillin-1 causes global impairment in the deposition of microfibrils. This could have dramatic effects on tissue structure and function. Figure adapted with permission from ().