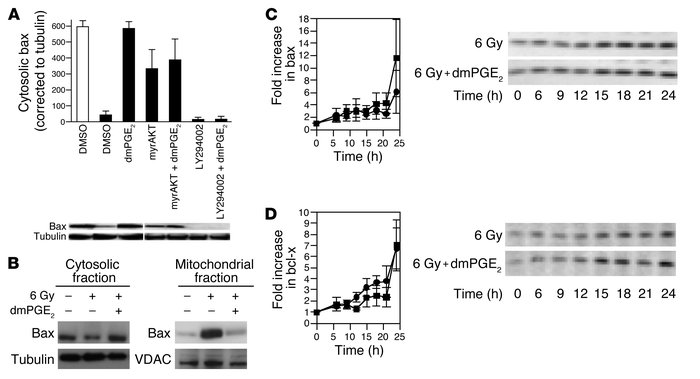 Bax translocation but not bax or bcl-x expression is modulated in irradiated HCT-116 cells by dmPGE2.() Bax translocation in HCT-116 cells. HCT-116 cells or HCT-116 cells transfected with a constitutively active AKT construct (myrAKT) received DMSO or dmPGE2 (10 μM) 1 hour prior to 6 Gy irradiation (black bars, 6 Gy; white bar, unirradiated). Where indicated, HCT-116 cells received 10 μM LY294002 1 hour prior to dmPGE2 treatment and subsequent irradiation. Twenty-four hours after irradiation, cells were isolated and fractionated into cytosolic and mitochondrial fractions, and the cytosolic fraction was analyzed for bax by Western blotting analysis. Upper panel: Average (± range) densitometry from 2 separate blots. Lower panel: Representative Western blot. () Translocation of bax from the cytosol to mitochondria in irradiated HCT-116 cells. Cytosolic and mitochondrial fractions were prepared from unirradiated HCT-116 cells and cells irradiated in the presence or absence of 10 μM dmPGE2. Proteins were separated by SDS-PAGE, and Western blots were probed for bax, tubulin, and voltage-dependent anion-selective channel protein (VDAC) as indicated. Data are representative of 2 separate experiments. ( and ) Bax () and bcl-x () expression in HCT-116 cells. HCT-116 cells were treated with DMSO or dmPGE2 (10 μM), irradiated at 6 Gy, and lysed at the indicated times. Duplicate lysates were combined, proteins were separated by SDS-PAGE, and bax or bcl-x expression levels were detected by Western blotting. Left panels: Densitometric analysis of several blots. Squares, vehicle; circles, dmPGE2. Data are the average ± SEM for 3_4 separate blots. Right panels: Representative Western blot.