Vitamin D controls calcium homeostasis and the development and maintenance of bones through vitamin D receptor activation. Prolonged therapy with rifampicin or phenobarbital has been shown to cause vitamin D deficiency or osteomalacia, particularly in patients with marginal vitamin D stores. However, the molecular mechanism of this process is unknown. Here we show that these drugs lead to the upregulation of 25-hydroxyvitamin D3-24-hydroxylase (CYP24) gene expression through the activation of the nuclear receptor pregnane X receptor (PXR; NR1I2). CYP24 is a mitochondrial enzyme responsible for inactivating vitamin D metabolites. CYP24 mRNA is upregulated in vivo in mice by pregnenolone 16α-carbonitrile and dexamethasone, 2 murine PXR agonists, and in vitro in human hepatocytes by rifampicin and hyperforin, 2 human PXR agonists. Moreover, rifampicin increased 24-hydroxylase activity in these cells, while, in vivo in mice, pregnenolone 16α-carbonitrile increased the plasma concentration of 24,25-dihydroxyvitamin D3. Transfection of PXR in human embryonic kidney cells resulted in rifampicin-mediated induction of CYP24 mRNA. Analysis of the human CYP24 promoter showed that PXR transactivates the sequence between –326 and –142. We demonstrated that PXR binds to and transactivates the 2 proximal vitamin D–responsive elements of the human CYP24 promoter. These data suggest that xenobiotics and drugs can modulate CYP24 gene expression and alter vitamin D3 hormonal activity and calcium homeostasis through the activation of PXR. 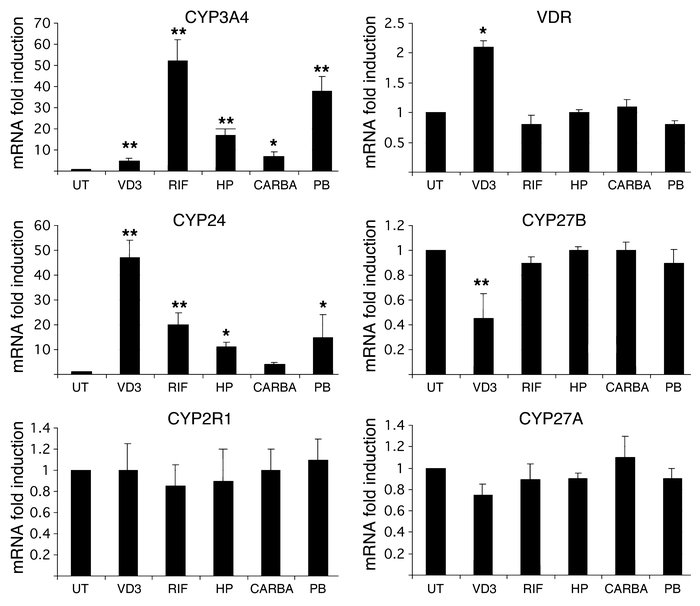