B lymphocyte differentiation is coordinated with the induction of high-level Ig secretion and expansion of the secretory pathway. Upon accumulation of unfolded proteins in the lumen of the ER, cells activate an intracellular signaling pathway termed the unfolded protein response (UPR). Two major proximal sensors of the UPR are inositol-requiring enzyme 1α (IRE1α), an ER transmembrane protein kinase/endoribonuclease, and ER-resident eukaryotic translation initiation factor 2α (eIF2α) kinase (PERK). To elucidate whether the UPR plays an important role in lymphopoiesis, we carried out reconstitution of recombinase-activating gene 2–deficient (rag2–/–) mice with hematopoietic cells defective in either IRE1α- or PERK-mediated signaling. IRE1α-deficient (ire1α–/–) HSCs can proliferate and give rise to pro–B cells that home to bone marrow. However, IRE1α, but not its catalytic activities, is required for Ig gene rearrangement and production of B cell receptors (BCRs). Analysis of rag2–/– mice transplanted with IRE1α trans-dominant-negative bone marrow cells demonstrated an additional requirement for IRE1α in B lymphopoiesis: both the IRE1α kinase and RNase catalytic activities are required to splice the mRNA encoding X-box–binding protein 1 (XBP1) for terminal differentiation of mature B cells into antibody-secreting plasma cells. Furthermore, UPR-mediated translational control through eIF2α phosphorylation is not required for B lymphocyte maturation and/or plasma cell differentiation. These results suggest specific requirements of the IRE1α-mediated UPR subpathway in the early and late stages of B lymphopoiesis. 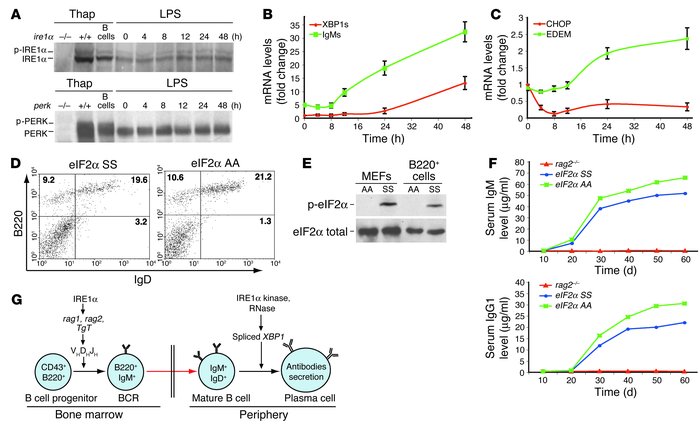 PERK-eIF2α UPR signaling is not required for plasma cell differentiation. () IP–Western blot analysis of expression and activation of IRE1α and PERK in primary B cells upon LPS stimulation. B220+ primary B cells from the spleens of 2-month-old WT mice were cultured in vitro in the presence of LPS (20 μg/ml) for the indicated time intervals. To generate controls for IRE1α and PERK proteins, WT, α, and MEFs and primary B cells were treated with thapsigargin (Thap; 0.2 μM) for 3 hours. Equivalent amounts of cellular lysates were applied for each sample. p-, phosphorylated. (–) Kinetics of induction of spliced and secreted transcripts () and and transcripts () in primary B cells upon LPS treatment. Primary B cells were isolated from spleens of WT adult mice and were then stimulated with LPS (20 μg/ml) in vitro for the indicated time intervals. Levels of transcripts were determined by quantitative real-time RT-PCR. () FACS analysis of B220 and IgD in splenocytes from mice reconstituted with WT (eIF2α SS) or eIF2α phosphorylation–defective (eIF2α AA) fetal liver cells. Fetal hematopoietic liver cells (4 × 106) from E13.5 embryos were used for transplantion. () Western blot analysis of phosphorylated and total eIF2α proteins in the reconstituted B cells. B220+ cells were sorted from the spleens of mice reconstituted with eIF2α AA or SS fetal liver and then treated with 0.2 μM thapsigargin for 3 hours. Thapsigargin-treated eIF2α AA and SS MEFs were used as controls. () Levels of serum IgM and IgG1 in the mice reconstituted with eIF2α SS or eIF2α AA fetal liver cells. Blood samples were collected from the reconstituted mice at 1 month after transplantation. Levels of serum IgM and IgG1 were determined by ELISA. () The proposed model depicts that IRE1α is required for both the early and the late stages of B lymphocyte development. At the very early stage, IRE1α plays a role in the induction of the , , and genes; thus IRE1α is required for VDJ recombination and BCR formation. At the late stage, IRE1α kinase and RNase activities regulate the terminal differentiation of B cells to plasma cells through splicing of mRNA.