Although arterial bifurcations are frequent sites for obstructive atherosclerotic lesions, the optimal approach to these lesions remains unresolved. Benchtop models of arterial bifurcations were analyzed for flow disturbances known to correlate with vascular disease. These models possess an adaptable geometry capable of simulating the course of arterial disease and the effects of arterial interventions. Chronic in vivo studies evaluated the effect of flow disturbances on the pattern of neointimal hyperplasia. Acute in vivo studies helped propose a mechanism that bridges the early mechanical stimulus and the late tissue effect. Side-branch (SB) dilation adversely affected flow patterns in the main branch (MB) and, as a result, the long-term MB patency of stents implanted in pig arteries. Critical to this effect is chronic MB remodeling that seems to compensate for an occluded SB. Acute leukocyte recruitment was directly influenced by the changes in flow patterns, suggesting a link between flow disturbance on the one hand and leukocyte recruitment and intimal hyperplasia on the other. It is often impossible to simultaneously maximize the total cross-sectional area of both branches and to minimize flow disturbance in the MB. The apparent trade-off between these two clinically desirable goals may explain many of the common failure modes of bifurcation stenting. 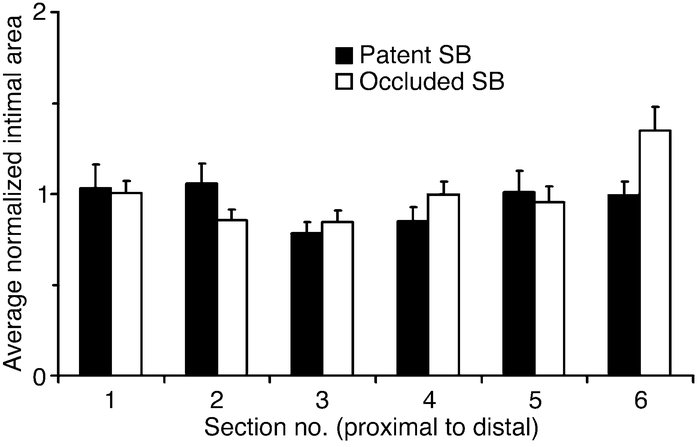 Occlusion in the absence of remodeling (group B). In group B animals, the MB was not allowed time to adapt to an occluded SB. Thus, a different pattern of intimal hyperplasia occurred. There is no significant difference between MB stent performance in the SB-occluded versus SB-patent case ( = 3 animals, = 6 bifurcations). The “protective” role that SB occlusion had on the MB stent is lost when remodeling is limited.