PTEN is a tumor suppressor gene mutated in many human cancers, and its expression is reduced or absent in almost half of hepatoma patients. We used the Cre-loxP system to generate a hepatocyte-specific null mutation of Pten in mice (AlbCrePtenflox/flox mice). AlbCrePtenflox/flox mice showed massive hepatomegaly and steatohepatitis with triglyceride accumulation, a phenotype similar to human nonalcoholic steatohepatitis. Adipocyte-specific genes were induced in mutant hepatocytes, implying adipogenic-like transformation of these cells. Genes involved in lipogenesis and β-oxidation were also induced, possibly as a result of elevated levels of the transactivating factors PPARγ and SREBP1c. Importantly, the loss of Pten function in the liver led to tumorigenesis, with 47% of AlbCrePtenflox/flox livers developing liver cell adenomas by 44 weeks of age. By 74–78 weeks of age, 100% of AlbCrePtenflox/flox livers showed adenomas and 66% had hepatocellular carcinomas. AlbCrePtenflox/flox mice also showed insulin hypersensitivity. In vitro, AlbCrePtenflox/flox hepatocytes were hyperproliferative and showed increased hyperoxidation with abnormal activation of protein kinase B and MAPK. Pten is thus an important regulator of lipogenesis, glucose metabolism, hepatocyte homeostasis, and tumorigenesis in the liver. 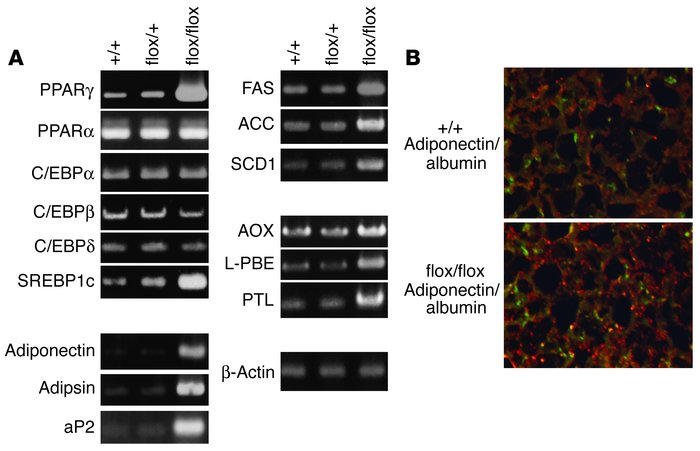