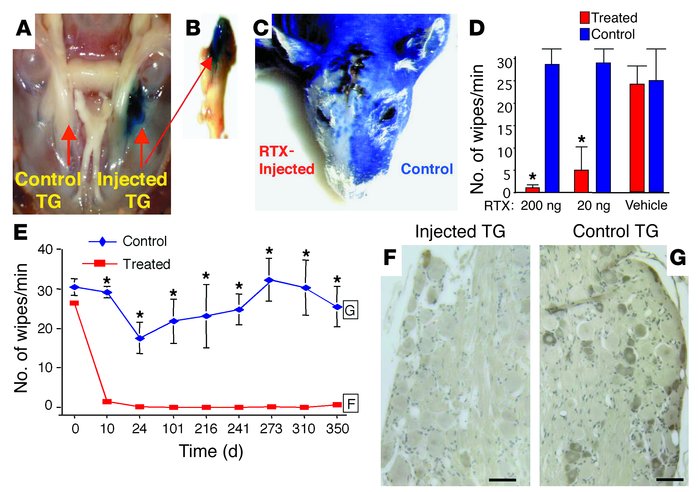 Single intraganglionic treatment. RTX was microinjected unilaterally into the TG using a transcranial stereotaxic approach. () Coomassie blue dye depicts trigeminal injection site at the base of the skull and () excised, stained TG. () RTX-induced blockade of neurogenic inflammation was evaluated by extravasation of Evans blue_stained plasma proteins. Blue areas of skin identify regions with intact C-fiber innervation. Extravasation was blocked on the RTX-injected side, which remains white. () Dose-related blockade of nociceptive afferent transmission from the cornea after unilateral intraganglionic RTX administration. CAP eye-wipe response was assessed 1_3 days after injection. *Pairwise test; < 0.01; = 30, 6, and 18 for administration of 200 ng, 20 ng, and vehicle, respectively. () Block of CAP-induced eye-wipe response is evident as up to about 1 year in unilaterally intraganglionically treated rats, consistent with the permanent deletion of TRPV1-IR neurons, as shown in and (*repeated pairwise test; < 0.01; = 7). On the RTX-treated side (), there is a reduction (∼80%, similar to animals examined within 1 to 3 days after RTX treatment; see Figure ) of TRPV1-IR neurons compared with the contralateral nontreated side (). Bars: 100 μm.