Quorum sensing via the accessory gene regulator (agr) system has been assigned a central role in the pathogenesis of staphylococci, particularly Staphylococcus aureus. While the control of virulence gene expression in vitro by agr has been relatively straightforward to describe, regulation of both the quorum response itself and virulence genes in vivo is considerably more complex. The quorum response is highly dependent upon the environment in which the organism is grown and is strongly influenced by additional regulators that respond to signals other than cell density. There is increasing evidence that the agr phenotype may influence the behavior and pathogenesis of biofilm-associated S. aureus and S. epidermidis and may contribute to the chronic nature of some biofilm-associated infections. 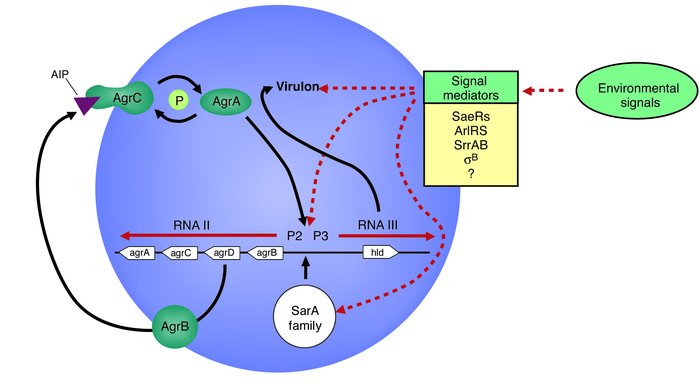 The accessory gene regulator () system in . The P2 operon encodes (via RNAII) the signaling mechanism, whereas the transcript of the P3 operon, RNAIII, acts as the effector molecule of the locus. Additional regulators of the quorum response and virulence genes, described in the text, are listed. Potential regulatory pathways used by environmental signals are indicated by the dashed red lines.