VEGF is crucial for metaphyseal bone vascularization. In contrast, the angiogenic factors required for vascularization of epiphyseal cartilage are unknown, although this represents a developmentally and clinically important aspect of bone growth. The gene is alternatively transcribed into VEGF120, VEGF164, and VEGF188 isoforms that differ in matrix association and receptor binding. Their role in bone development was studied in mice expressing single isoforms. Here we report that expression of only VEGF164 or only VEGF188 (in mice) was sufficient for metaphyseal development. mice, however, showed dwarfism, disrupted development of growth plates and secondary ossification centers, and knee joint dysplasia. This phenotype was at least partly due to impaired vascularization surrounding the epiphysis, resulting in ectopically increased hypoxia and massive chondrocyte apoptosis in the interior of the epiphyseal cartilage. In addition to the vascular defect, we provide in vitro evidence that the VEGF188 isoform alone is also insufficient to regulate chondrocyte proliferation and survival responses to hypoxia. Consistent herewith, chondrocytes in or close to the hypoxic zone in mice showed increased proliferation and decreased differentiation. These findings indicate that the insoluble VEGF188 isoform is insufficient for establishing epiphyseal vascularization and regulating cartilage development during endochondral bone formation. 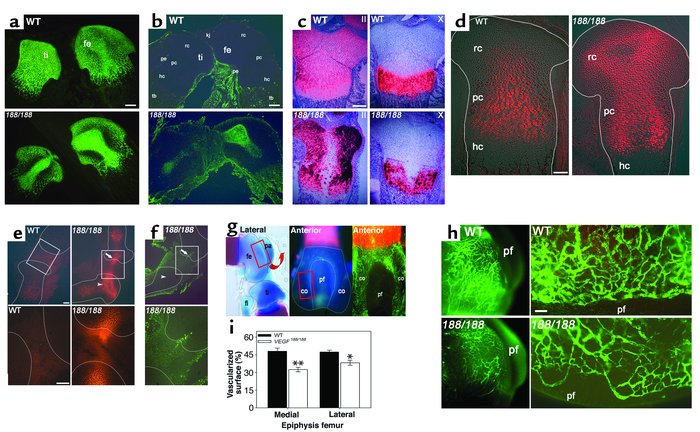