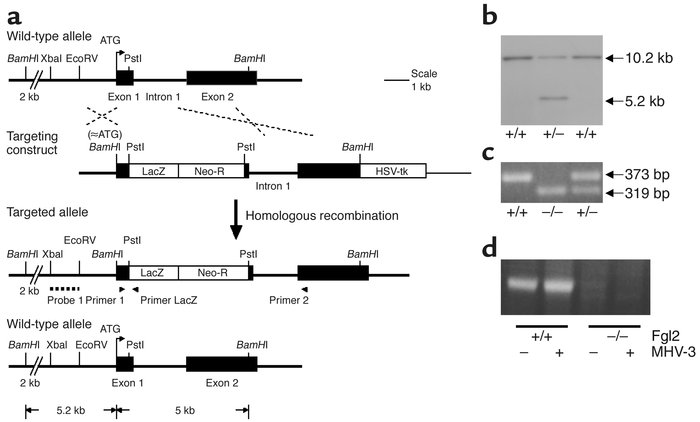 Generation of Fgl2/fibroleukin-deficient mice. () Targeting strategy for gene. The reporter and -neo gene were inserted within the first of two coding exons, and the Fgl2/fibroleukin initiator methionine codon in exon 1 was mutated to a I site. Arrowheads represent primers used for multiplex PCR genotyping. The probe used for genomic Southern blot analysis is indicated by the dotted line. () Genomic Southern blot analysis of ES cell clones. The 10.2-kb or 5.2-kb I restriction fragments are evident in wild-type or knockout alleles, respectively. () Multiplex PCR for genotyping mice amplified a 319-bp amplicon from the knockout allele or a 373-bp amplicon from the wild-type allele. () RT-PCR analysis of MHV3-treated macrophages (8 hours). Neither constitutive nor induced mRNA was detected in the null knockout mice.