We previously reported that laboratory reference strains of Chlamydia trachomatis differing in infection organotropism correlated with inactivating mutations in the pathogen’s tryptophan synthase (trpBA) genes. Here, we have applied functional genomics to extend this work and find that the paradigm established for reference serovars also applies to clinical isolates — specifically, all ocular trachoma isolates tested have inactivating mutations in the synthase, whereas all genital isolates encode a functional enzyme. Moreover, functional enzyme activity was directly correlated to IFN-γ resistance through an indole rescue mechanism. Hence, a strong selective pressure exists for genital strains to maintain a functional synthase capable of using indole for tryptophan biosynthesis. The fact that ocular serovars (serovar B) isolated from the genital tract were found to possess a functional synthase provided further persuasive evidence of this association. These results argue that there is an important host-parasite relationship between chlamydial genital strains and the human host that determines organotropism of infection and the pathophysiology of disease. We speculate that this relationship involves the production of indole by components of the vaginal microbial flora, allowing chlamydiae to escape IFN-γ–mediated eradication and thus establish persistent infection. 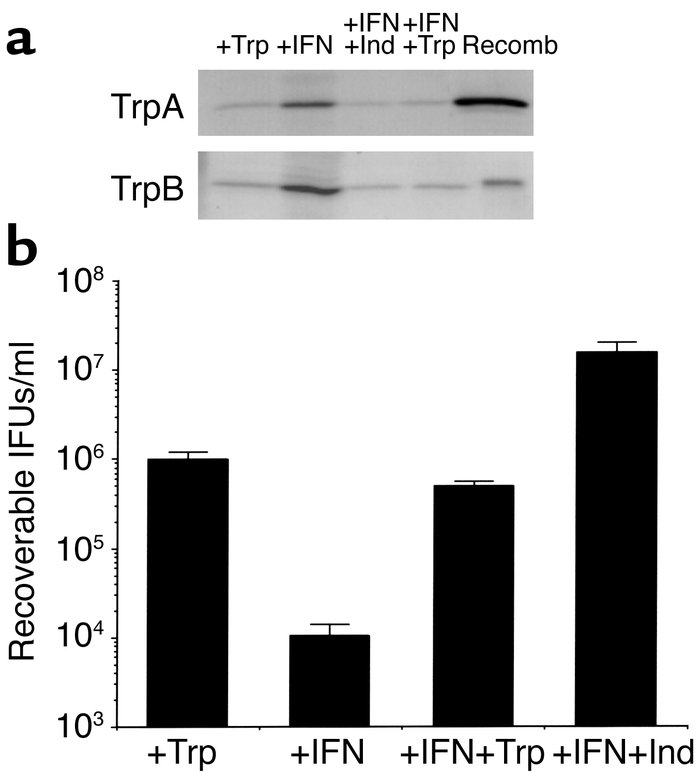 () Western blot analysis of TrpA and TrpB expression in HeLa cell monolayers infected with a clinical B isolate. Cell culture conditions, harvesting, chlamydial protein sample preparation, and Western blot procedure were as described in the legend to Figure . () Effect of indole or tryptophan on the growth of genital serovar B clinical isolate cultured in the presence of IFN-γ. Cell culture conditions, harvesting at 72 hours after infection, and enumeration of recoverable infectious chlamydial EBs were as described in the legend to Figure . Data are presented as IFUs (log10) and represent the means ± SD of triplicate determinations.