Ectopic calcification is a frequent complication of many degenerative diseases. Here we identify the serum protein α2–Heremans-Schmid glycoprotein (Ahsg, also known as fetuin-A) as an important inhibitor of ectopic calcification acting on the systemic level. Ahsg-deficient mice are phenotypically normal, but develop severe calcification of various organs on a mineral and vitamin D–rich diet and on a normal diet when the deficiency is combined with a DBA/2 genetic background. This phenotype is not associated with apparent changes in calcium and phosphate homeostasis, but with a decreased inhibitory activity of the Ahsg-deficient extracellular fluid on mineral formation. The same underlying principle may contribute to many calcifying disorders including calciphylaxis, a syndrome of severe systemic calcification in patients with chronic renal failure. Taken together, our data demonstrate a critical role of Ahsg as an inhibitor of unwanted mineralization and provide a novel therapeutic concept to prevent ectopic calcification accompanying various diseases. 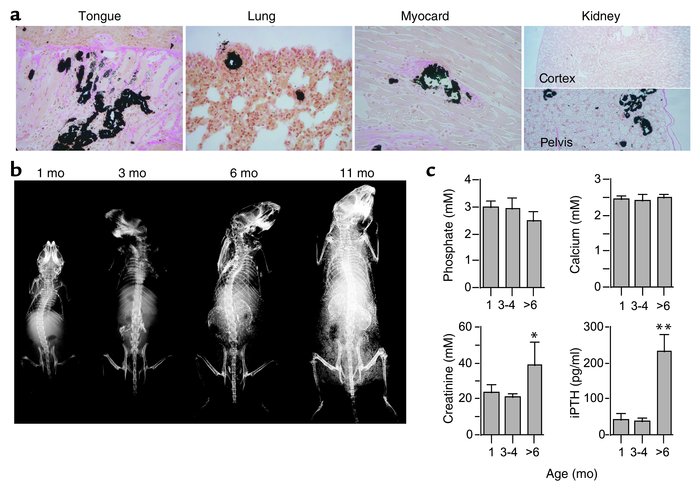 Calcification of Ahsg-deficient DBA/2 mice precedes kidney failure. () Plastic-embedded tissues of 1-month-old mice were sectioned and stained by von Kossa staining and counterstained with H&E. Calcification was detected in soft tissues including tongue, lung, myocardium, and kidney pelvis, but not yet in the kidney cortex. Note that even at 9 months of age, WT DBA/2 mice showed no calcification (see Figure b). () Radiological analysis detected progressive calcification of the kidneys and the skin. Note that the mice were alive at the time of radiography and therefore calcified heart and lung tissue was blurred due to movement. () Determination of serum phosphate, calcium, creatinine, and intact parathyroid hormone indicated that kidney failure in DBA/2- mice occurred after 4 months of age and therefore after the onset of soft tissue calcification (1 month, = 4; 3–4 months, = 6; over 6 months, = 4). * < 0.05, ** < 0.001.